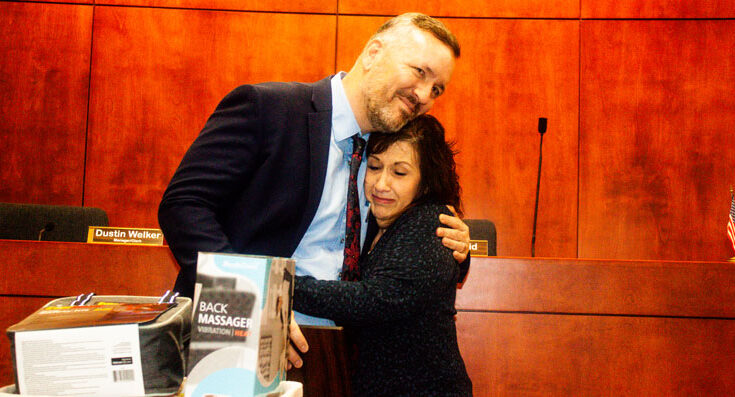 SAFFORD – After 20 years behind the bench in Safford Justice of the Peace District 1, Judge Gary Griffith has finally gotten his name back.

A retirement party was held at the General Services Building on Thursday honoring Gary Griffith, who took off his judicial robes for the final time. Those in attendance included fellow judges, attorneys, law enforcement, court staff, county supervisors, friends, and family. During a small presentation, Griffith addressed the company.

“It’s been an absolute pleasure working as Justice of the Peace here,” Griffith said.

At his side, as she has been for his entire 20-year career, was Judicial Assistant and IA Master Anna Elder, who presented Griffith with a plaque.

“I’m going to miss you very much,” Elder told Griffith during the presentation. “Thank you for being a great boss – a great judge.”

Now that he is retired from the bench, Griffith is free to practice law again and has accepted the position as Greenlee County Chief Deputy County Attorney under Greenlee County Attorney Scott Adams. Since he will be making the commute to Greenlee County, attorneys presented Griffith with a box of “essentials” including snacks and a seat massager for the commute. The group was organized by defense attorney Rebecca Johnson, who also presented Griffith with a traditional retirement gift of a pocket watch from the group.

“We’re going to miss you,” Johnson told Griffith during the presentation. “I’m going to be fortunate enough to still be able to see you up in Greenlee. I get to see a whole other side of you – one that isn’t fair and impartial. No offense prosecutors.”

Griffith completed his undergraduate studies at the University of Arizona and then graduated from Georgetown Law in Washington D.C. in the late 90s, just don’t ask him to pin it down to what year exactly.

“So Georgetown, because it’s a Jesuit school, their diploma is written in Latin – it’s not in English,” Griffith said. “I have my diploma on a wall and I can’t read a word of it . . . The date is in like Roman numerals spelled out, so I don’t know the date that I graduated law school.”

After learning of the consolidation, Griffith was presented with a job offer from Greenlee County. After mulling it over, he decided to take his 20-year retirement from being a judge and accept his new position as a prosecutor in Greenlee County.