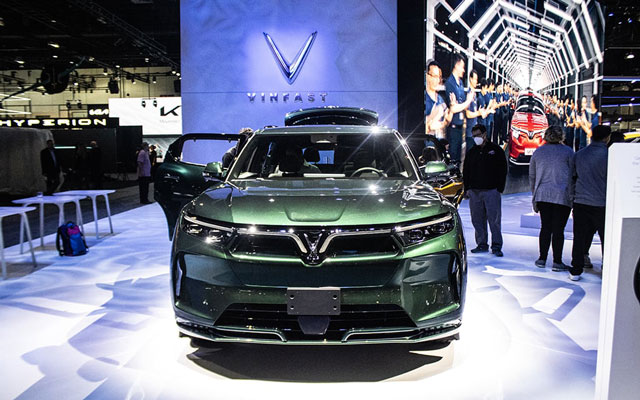 Photo by Emeril Gordon/Cronkite News: The VinFast VF8 is coming to the U.S. in early 2023, company officials say, along with the VF9. The photo was taken Nov. 17, 2022, at the Los Angeles Auto Show.

LOS ANGELES – America is about to get another electric car brand, one that’s gone from the steaming jungles of Vietnam to the scorching deserts of Arizona.

VinFast is about to enter the competitive U.S. market with two Italian-designed crossover SUVs it introduced at the Los Angeles Auto Show in November. They join two other models that debuted in 2021.

But experts say succeeding in the U.S. market won’t be easy, given the cascade of new electric models on the way from established automakers and the continued higher cost of EVs compared to gasoline-powered vehicles.

“Americans want … the best thing for the cheapest price,” said Brian Moody, author at the car sales and advice site Kelley Blue Book. “And that’s hard to do with electric cars.”

VinFast was founded in Vietnam in 2017 as part of Vingroup, a conglomerate of private Vietnamese businesses ranging from real estate to technology. Initially, it made gas-powered vehicles but is switching to battery-powered models only.

VinFast introduced two crossovers at the 2022 Los Angeles Auto Show: the subcompact VF6 and the compact VF7. They join two already on sale outside the U.S., the midsize VF8, and the larger VF9.

When VinFast came to the 2021 Los Angeles Auto Show, it was intent on showing that it wants to join other automakers in selling vehicles worldwide.

“And over the last 12 months, VinFast has taken enormous strides towards our goal of global recognition,” said Craig Westbrook chief service officer for VinFast U.S.

VinFast shipped its first batch of VF8s to the U.S. at the end of November, and Westbrook told Car Buzz that the other models will hit the market in 2023.

Analysts don’t think buyers will be put off by VinFast’s Vietnamese origin because Americans pay less attention these days to where their cars are made.

“I don’t think American consumers necessarily are that consumed by the nature of the vehicle brand, whether it’s from Vietnam, or Korea or wherever it may be,” said Jessica Caldwell, executive director of insights at the car research and sales site Edmunds.

But she noted it’s a tough market for any startup, despite Tesla’s success, because established automakers are introducing more electric models now, which could squeeze out new competitors.

Like other automakers, VinFast has tested its cars in Arizona to see how well they hold up under the summer swelter. “We’re trying to capture all of the environmental possibilities that customers face,” said Westbrook, adding that the vehicles performed well in high temperatures.

VinFast manufactures its vehicles in Vietnam, but in March it announced plans to build a factory outside Raleigh, North Carolina, which it said will employ 1,000 workers and open in 2024.

The VF6 is powered by a single electric motor producing 174 horsepower, but an upgraded version will have 201 horses. The VF7 will be available with one electric motor, producing 201 horsepower, or two, with 349 horsepower. The company hasn’t released information about battery capacity and estimated driving range or price for the new vehicles.

The VF8, however, is priced from $57,000. The automaker is giving customers the option of renting the car’s battery, rather than buying it, for $169 a month with unlimited range, which reduces the base price to $42,200.