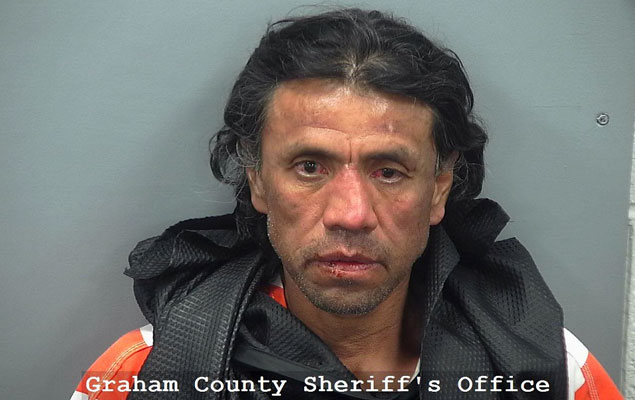 Contributed Photo/Courtesy GCSO: Jonathan Wilson was arrested and booked on a charge of disorderly conduct after allegedly disturbing the peace of some park-goers.

SAFFORD – Jonathan Wilson, 52, of Bylas, was arrested and booked into the Graham County Adult Detention Facility on Wednesday, Sept. 16, on a charge of disorderly conduct.

Wilson received the charge after allegedly harassing a family at Firth Park.

According to a Safford Police report, one of the victims advised they were at the park when an intoxicated homeless man approached them using vulgar language in front of his children who were playing at the park. At one point, the father said the man formed his hand in the shape of a gun, pointed it at him, and said that he was going to “(expletive deleted) kill him.”

The description given by the victim matched that of Wilson, who is well-known to local authorities and has a long history of police interaction – mostly for trespassing violations.

Wilson was located behind the Valley Motel and was taken into custody. Due to his intoxication level, Wilson was transported to the Mt. Graham Regional Medical Center, where he became belligerent to the medical staff and the officer, according to the report. Wilson was then physically restrained onto a hospital bed.

After being medically cleared, Wilson was booked into the jail on a charge of disorderly conduct. Later, Safford City Attorney Matt Clifford advised that the charges should be forwarded for felony charges, according to the report.

Firth Park is a popular spot for the local homeless population with encampments being located across the highway and the proximity to a local convenience store. The park also has amenities, including picnic tables and restrooms. There is a strict no-alcohol of any kind ordinance at the park and is enforced by the Safford Police. Additionally, surveillance cameras are utilized to help reduce incidents at the location and skatepark.