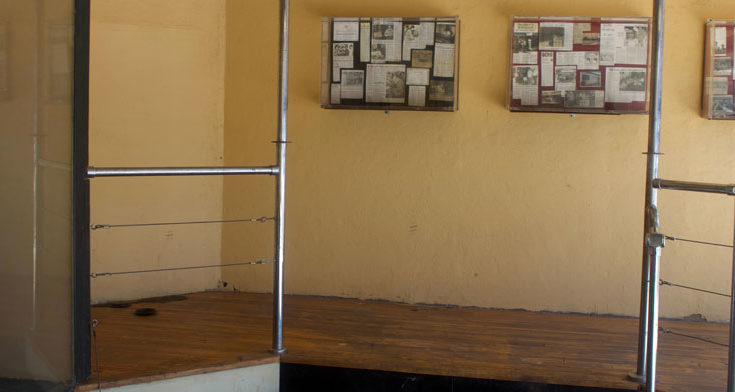 Jon Johnson Photo/Gila Herald: A homeless man was caught on video surveillance defecating on the stage out front of one of the GCRC’s thrift stores.

An officer was dispatched to the scene at about 8:16 a.m. and met with the business’ manager, who showed him video footage of the act.

In the video, a man, later identified as Ben Shaw, 43, is seen drinking an alcoholic beverage on the steps of the eastern stage. The store has outdoor stages on both sides.

Shaw then is seen moving to the northern part of the stage and defecating. After he finished, he pulled his pants back up and left the stage area only to return shortly thereafter and defecate again.

The manager advised that the human excrement had already been cleaned but that he wanted to press charges against Shaw and have him trespassed from the property.

Shaw is one of a group of homeless individuals who have been a menace to the area with numerous calls for panhandling, vagrancy, and alcohol violations.

Shaw, who had a valid warrant for his arrest, was located at Firth Park. However, due to his high intoxication level, he could not be booked into the jail at that time.

Shaw allegedly admitted to defecating on the stage and said he was sorry but it was an emergency.

The officer advised Shaw that he was trespassed from the store and that a report regarding charges of disorderly conduct, criminal trespass in the second degree and public nuisance would be sent to the Safford City Attorney’s Office.

The following day, Shaw was picked up on his warrant for failure to show up to court and was booked into the Graham County Adult Detention Facility. He pleaded guilty  Monday and was given a jail sentence, according to online court records. However, when the Gila Herald called the Gila Valley Consolidated Court for confirmation and more details on the sentencing, the clerk said she was there by herself and was too busy to look up the case to see what sentence Shaw was given.