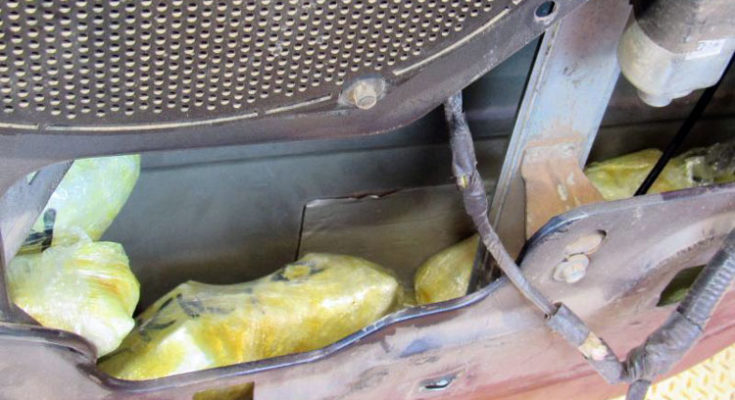 Contributed Photo: Officers discovered packages of meth within a speaker box inside of a smuggling vehicle.

TUCSON – U.S. Customs and Border Protection officers arrested a Mexican national in connection to a failed smuggling attempt Friday resulting in the seizure of more than 100 pounds of methamphetamine at Arizona’s Port of San Luis.

Officers referred a 39-year-old San Luis, Rio Colorado, Sonora, Mexico woman for additional inspection of her Ford truck as she attempted to enter the U.S. from Mexico that morning. Following an alert by a CBP narcotics detection canine to a scent it was trained to detect, officers discovered packages of meth throughout the vehicle. The drugs with a weight in excess of 106 pounds are valued at more than $318,000 wholesale.

CBP officers seized the drugs and vehicle. The subject was arrested and turned over to U.S. Immigration and Customs Enforcement’s Homeland Security Investigations.

U.S. Customs and Border Protection is the unified border agency within the Department of Homeland Security charged with the management, control, and protection of our nation’s borders at and between the official ports of entry. CBP is charged with keeping terrorists and terrorist weapons out of the country while enforcing hundreds of U.S. laws.