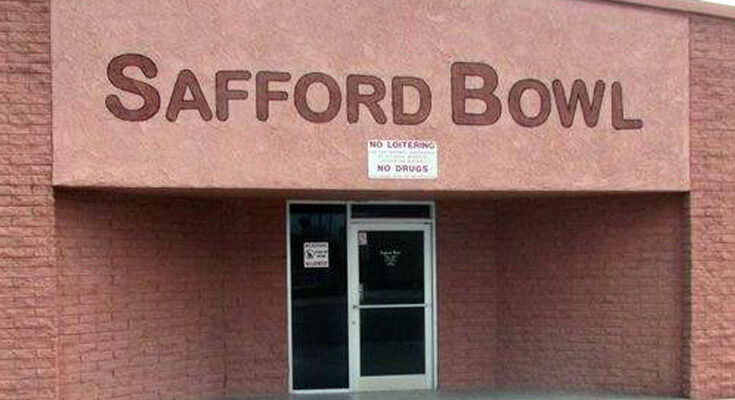 The perpetrators of a hit-and-run in the parking lot of the Safford Bowl were later found by police.

SAFFORD – The two occupants of a truck that struck a parked vehicle at the bowling alley and then fled were located intoxicated.

According to a Safford Police report, an officer was dispatched at about 5:47 p.m. on March 15 to the Safford Bowl at 410 E. 4th St. regarding a hit-and-run collision.

Upon arrival, witnesses advised seeing an older white truck back out of a space near a vehicle and then hit the rear passenger side. The passenger of the truck then told the driver to leave the area, according to a witness.

After speaking with the victim, the officer spoke to an employee at the bowling alley who identified one of the male subjects in the truck as Evan Stengal.

The officer contacted Stengal by phone, and Stengal allegedly advised he was at the bowling alley with his co-worker, Joey Rodriguez, and that Rodriguez struck another vehicle in the parking lot with his truck when they were leaving.

However, when the officer later met with Stengal in person, Stengal advised he had been the one driving Rodriguez’s truck. He said he accidentally struck the other vehicle and when he did Rodriguez told him to “go, go, go,” so he left the area.

Stengal, who appeared intoxicated according to the police report, matched the description of the driver given by a witness. The truck was still in his possession, and the license plate came back as being not registered.

Stengal was given a citation for leaving the scene of an accident and he provided a copy of his insurance for the officer to provide to the victim. Stengal said if his insurance didn’t pay that he and Rodriguez would make sure that the victim’s vehicle is repaired.