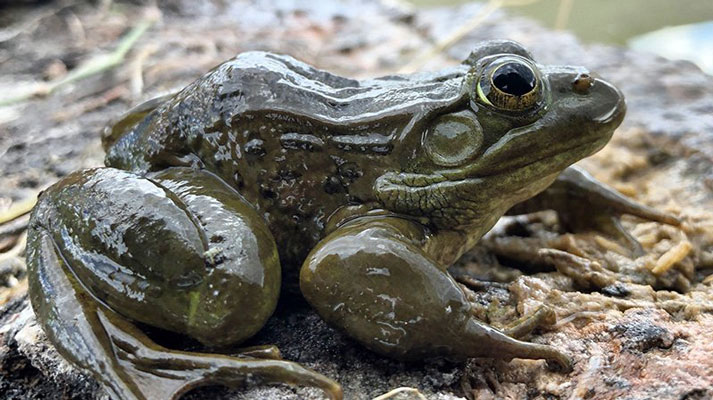 Photo Courtesy of Arizona Game & Fish Department: Chiricahua leopard frogs have a distinctive call that sounds like a snore lasting up to two seconds, the U.S. Fish and Wildlife Service says.

PHOENIX – In the sky islands of southeastern Arizona, the Chiricahua leopard frog persists – a lofty feat only made possible by a team more than 200 miles away.

The frog, which is native to Arizona, was named after the Chiricahua Mountains, where researchers first documented them in the early 1970s, although the stout-bodied frog with leopard-like spots also has been found along the Mogollon Rim and in the White Mountains near the New Mexico state line. Historically the small frogs could be found in west-central and southwestern New Mexico, central and southeastern Arizona, and parts of northern Mexico.

The frogs, which grow to 2 to 5 inches in length, have been considered threatened by the federal government since 2002, and according to Chris Bugbee, the Southwest conservation advocate at the Center for Biological Diversity in Tucson, cattle are to blame.

“The problem is that cows are decimating this critical habitat and hindering the recovery of this frog,” he said.

The center did field surveys across 20 grazing allotments throughout Arizona that are designated as critical habitat for the frogs. In January, it issued a report stating Chiricahua leopard frogs were found in less than 10% of the ponds surveyed, and nearly all these water sources had been trampled and contaminated with cattle feces.

Not everyone agrees with the study’s findings, however. Audrey Owens is the project coordinator for the Arizona Game & Fish Department, and she focuses her work on ranid frogs — a term for “true frogs” in the family Ranidae. Owens argues that cattle ranchers are necessary for the frogs’ survival because cattle and frogs both need water. Over the past 15 years, Game & Fish says, Arizona locations where Chiricahua leopard frogs are found have grown from fewer than 40 to more than 150.

“Chiricahua leopard frogs use habitat provided by cattle tanks or stock tanks,” she said. “To some extent, that happened naturally with the frogs just dispersing into those cattle tanks, because it was maybe the only source of permanent water around.”

In Arizona, cattle are grazed on state, federal and private lands. Game & Fish has a statewide program that partners with private landowners who agree to provide habitat for the frogs.

“In exchange, they get a guarantee that they’re not going to have additional restrictions on their land use by having a threatened species on their property,” Owens said.

The Chiricahua leopard frog faces threats beyond cattle, such as chytrid fungus and predators. The fungus, also known as chytridiomycosis, is an infectious disease that has killed amphibians worldwide.

“Bullfrogs and crayfish are bad because they can prey on Chiricahua leopard frogs, not only the frogs but also tadpoles and potentially egg masses,” Owens said.

To reverse the damage, some organizations – including the Phoenix Zoo – are actively working to boost the leopard frog population. The privately-owned zoo has had a breeding program for 26 years, in conjunction with Game & Fish, the U.S. Fish and Wildlife Service, and the Forest Service.

In a news release, the Phoenix Zoo said the program’s mission is to adjust “management and care protocols to maximize the number of healthy egg masses, tadpoles, and frogs available for release.”

Tara Harris, who directs conservation and science at the Phoenix Zoo, said they capture wild frogs at “a stage where they’re most vulnerable” to being eaten and raise them at the zoo to get them past that “really vulnerable stage.”

Game & Fish provides egg masses for zoo staff to nurture. After the egg masses become tadpoles and frogs, Harris said, staff members “release them back out into the wild with our partners so that hopefully they have a much better chance of surviving to adulthood.”

The zoo last year released 410 tadpoles and 235 frogs back into the wild. In total, the zoo has released more than 26,000 tadpoles and frogs since the program began in 1995.

Despite the breeding program’s efforts, Bugbee, with the Center for Biological Diversity, fears the frogs won’t survive in the wild.

“They are dumping frogs into habitat that is not good,” he said. “It has a lot of problems.”

“It’s going to give these frogs a better shot at survival,” he said.

Although everyone involved doesn’t see eye to eye, they all share the same end goal: saving the Chiricahua leopard frog from extinction.

“To be able to put ourselves out of business basically would be the ultimate goal,” Harris said. “That they can sustain themselves in the wild without our help would be amazing.”