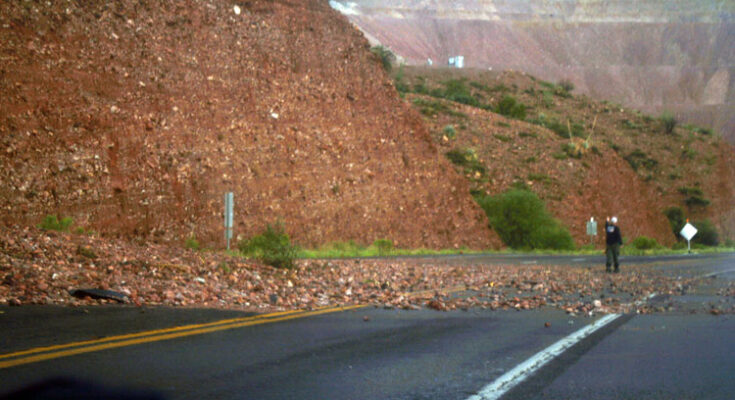 Walt Mares Photo/Gila Herald: Mud and rocks slid onto U.S. 191 during a heavy rain storm on Sunday afternoon, July 22. The three-lane road was temporarily closed until Morenci firefighters cleared enough of one lane to allow traffic to pass. Firefighters directed traffic allowing traffic to head uphill and downhill alternately on the steep road. The slide occurred around milepost 166.7 just above what is known locally as the Horseshoe Curve.

CLIFTON/MORENCI – It hit hard. Make that very hard. First, there was a tremendous amount of lighting and thunder. Thunder often came only a few seconds after lightning flashed. And then came the rain. A very heavy rain. In fact, it had been several years since such a heavy rain fell.

The Sunday, July 24 rainstorm that hammered Clifton and Morenci caused two sections of U.S. 191 to be temporarily closed when two separate hillsides collapsed and left tons of rocks and mud on the roadway.

The hard-driving storm began around 4:15 p.m. Saturday and continued for around two hours. It was the storm’s aftermath that had emergency service crews working late into the night and into the following morning.

The storm swamped the Clifton-Morenci area with an estimated four-inch rainfall. The historic mining town of Clifton and Morenci are located about three miles apart, via the highway. They are much closer as the crow flies.

Located in southeastern Arizona, the area is in the grip of a years-long drought. Temperatures as high as 108 degrees have been logged in the past few days. Saturday’s afternoon temp was around 101. Within two hours it dropped to 71. Saturday was the coolest night Morenci and Clifton have had in several weeks.

Besides the closure of the highway, electricity to businesses in Morenci and Clifton was knocked out, causing their closure until Monday morning. Bashas’ grocery store in Morenci shut down at around 4:45 p.m. Sunday due reportedly to a major leak in part of the store’s roof. It allowed too much-standing water in the store. The normally busy Marathon convenience store (formerly Conoco) closed about the same time. The store has the only gas station in that town.

Among the businesses in Clifton that closed due to lack of electricity were Circle K and Go-Go gas, the only two gas stations in Clifton. Also shut down by the storm were the Family Dollar and Dollar store. None of those opened until Monday morning.

In Clifton, the highway was closed for about three hours and finally reopened around 7:30 p.m. A huge amount of rock and mud from a steep mountain slope adjacent to the roadway caused that closure. A team of a frontend loader and a road grader from the Arizona Department of Transportation moved tons of debris, that included large rocks, from the highway and onto a roadside.

Some of the larger rocks bounced across the road and dented a steel fence along the Arizona Eastern Railroad.

By the time the ADOT crew neared clearing the road, darkness had set in. The grader and loader were fortunately equipped with very big lights that allowed them to work in the dark and finish the job.

As much dirt and rocks as the ADOT crew removed there remained a layer of mud that was soupy and thick. However, that was enough to allow traffic to resume.

The area where the landslide occurred was across the road from the Clifton Train Station. It appeared that the Train Station had not sustained standing water from the storm. However, it too lost power and a town marquee giving information was dark.

While 191 was closed, traffic was rerouted through Park Avenue in Eastside Clifton. The Clifton Fire Department blocked any access to the affected area on 191. But before the reroute was possible the Clifton Public works crew huge removed a huge boulder that was blocking that narrow roadway. It runs between steep cliffs and the San Francisco River.

Vehicles heading north and south were then alternately allowed to drive through Park Avenue.

Throughout and after the storm one injury was reported. A man fell walking northbound and approaching the Chase Creek bridge crossing U.S 191. Dark had already fallen. He slipped on some mud and gravel and fell hard. The man had a very bloody leg. He was taken by Clifton Police to the Gila Health Resources in Morenci. A doctor stitched up a fairly deep cut.

The Clifton Public Works crew worked late into Sunday night and early Monday morning in South Clifton clearing Tuner Avenue and some adjoining streets. Turner and Sixth Street in particular are prone to deluges of rocks and mud that during heavy rains are washed down from an adjacent steep hillside.

Crews were also hard at work removing more mud from Ward’s Canyon in South Clifton Saturday. The area is notorious for the heavy, deadly currents that rush through the canyon and into the San Francisco River.

In Morenci, a section of U.S. 191 heading to Clifton was closed for almost an hour as a portion of a hillside resulted in tons of rocks and mud pouring onto and across the entire width of the roadway. The road is three lanes wide, but there was so much debris from the mudslide that traffic had to be routed to a single lane at the far shoulder.  The slide occurred on a steep section of the highway about a half-mile above what is locally known as the Horseshoe Curve.

As for Monday, huge, white puffy clouds were forming over Clifton and Morenci. That left many locals wondering if another night of heavy rain was in store. According to online weather forecast, chances of rain were not very high for Monday and Tuesday’s chances of rain are more likely.

By the appearance of early Monday afternoon’s cloud formations that appeared to soon cover the entire sky a continued afternoon and night of rain does not seem remote.