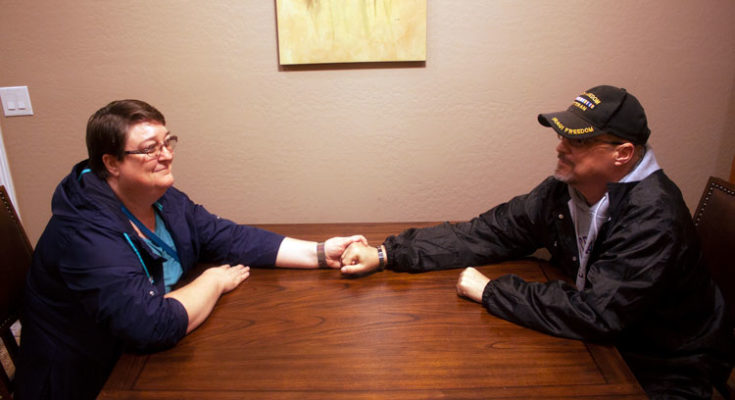 Jon Johnson Photo/Gila Herald: Linda and Steven Vigus look to each other for strength as he battles cancer amid dwindling funds due to lack of payment during the partial government shutdown.

SAFFORD – Having to work without pay for a month can be hard for anyone to handle, but for two long-time employees of the Federal Correctional Institution – Safford, it is literally a matter of life or death.

Retired Marines Steven Vigus and Anthony Aguilar have laid it on the line for their country and have given their best to working at the prison for the last 14 and 17 years, respectively. Both men have also been stricken with cancer and face grave circumstances if they deviate from their medically-ordered treatment regimen.

The two men were jovial in spirit when they arrived at the Gila Herald’s office to speak about their plight. But with Vigus wearing a surgical mask to avoid germs due to his compromised immune system, and Aguilar’s smile slowly giving away to a forlorn look, the face they put out for the public of strength and unity and assuredness is the true mask of hope they desperately attempt to hold onto as they feel their loved ones begin to slip away from their grasp.

Vigus is battling Acute Myeloid Leukemia (AML) and received a bone marrow transplant in September 2017. Currently, just one prescription he has to take is an anti-rejection mediation for the transplant, which costs him $317 per month out of pocket. In addition to prescription medication costs, he has co-pays he must cover and travel expenses for weekly trips to his doctor in Gilbert. With Vigus not receiving any money from his job and his family’s nest egg already depleted from paying to fight the cancer, he and his wife Linda are struggling to keep both the medication and food on the table.

Linda said while the family is struggling to survive, getting what her husband needs medically is the most important thing in their lives.

“I’m sorry, but medical is going to come first every time,” Linda said. “You gotta be alive to work, right? We haven’t fought this whole year to have something happen to him now.” (Sic)

Aguilar is battling esophageal cancer and has gone through two different types of chemotherapy. He advised that with the new year, he has a new deductible of $5,000 to make before his insurance kicks in and is currently going to two different cancer centers in the Phoenix area.

“There’s a lot of costs when you go up there,” Aguilar said. “That’s the kind of situation we are in now. Do you pay your medical costs or do you pay your bills?”

Nationwide, more than 800,000 federal workers are not getting paid due to the shutdown. Out of those, roughly 420,000 must still go to work as they are considered “essential” employees and do their job without getting paid.

Steven stressed that the shutdown is not only hurting the 800,000 federal employees, but also numerous other businesses and individuals who benefit from the money down the line. Additionally, the stress Steven and Aguilar and others with medical conditions are facing due to the shutdown has only added to their health struggle.

There still is hope, however, and local businesses, groups, organizations, local government and others have stepped up to help those who are struggling and are in need. The city of Safford and town of Thatcher are offering debt forveiness for federal employees’ utility bills for up to 90 days after the shutdown is lifted, food banks such as the St. Vincent de Paul has reached out to donate food, along with donations from the Church of Jesus Christ of Latter-day Saints and other local churches, Southeastern Arizona Community Action Program and the Graham County Health Department is assisting with a bulk produce purchase that will be available for families to receive food. Arizona banks are also offering no-interest loans for 90 days to help out as well.

The American Federation of Government Employees Council of Prison Locals 33 Secretary Beth Holloway and Treasurer Ynetta Villalba were also on hand for the interview and all praised all the local assistance and suppport given to their plight. In the end, however, Villalba said while the federal employees want to do their part for the community, it is difficult to do so financially while they are not being paid.

“We’re a small town and have a lot of mom and pop shops that depend on these working families,” Villalba said. “Whether you’re working at the mine or state or federal prison, it’s a small town and people in a small town want to take care of each other. If you’re not getting paid, you can’t support your community.”

As of Monday, the government has been in a partial shutdown for 31 days with not end in sight as President Donald J. Trump and Congress do not appear to be able to come to an agreement on how to fund the government, including President Trump’s desired $5.7 billion to partially extend the border barrier with Mexico. In the meantime, the furloughed and non-paid federal workers who are still working are keeping their noses to the grindstone while praying for a solution.

“We just keep working and hope it gets figured out,” Linda said.

Both Steven Vigus and Aguilar have gofundme accounts set up. Those who are able to donate can reach the Vigus family’s account here and Aguilar’s account here. Both accounts were created last year to help with medical expenses prior to the government shutdown.