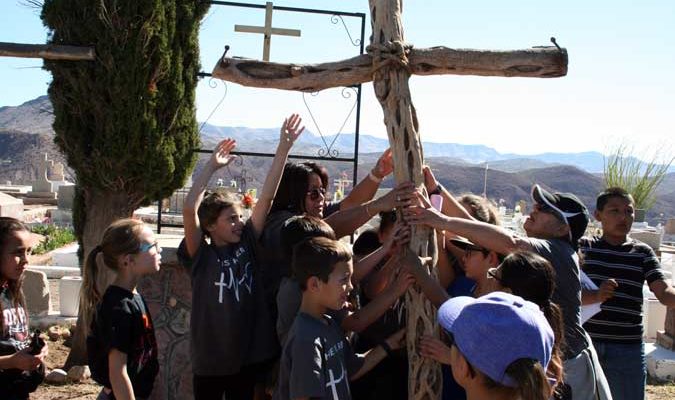 Photo By Walt Mares: Youths, led by Holy Cross Catechism teachers Theresa Campbell and Berta Leon, lift the cross when it reaches its final destination at the Sacred Heart Cemetery in Clifton.

Traditional trek is made from Morenci’s Holy Cross

MORENCI – It was indeed a blessed morning. The sky was a deep blue. There was not a cloud in the sky. Although the sun was shining bright, no one said anything about discomfort. No doubt a factor involved was that the procession began at 8 a.m. when the air was still cool.

Along with the beginning of a beautiful day, there was the blessing of it being Good Friday. With it was the tradition of the many who made the trek from Holy Cross Catholic Parish to the Sacred Heart Cemetery. Tradition called for parishioners to carry a rugged cross, which was beautiful in its simplicity.

Parishioners, four and five at a time, took turns bearing the 8-foot-long cross.

There were stops along the way during which the Stations of the Cross were recited. Father Nathaniel Mma led the recitations. He was garbed in black clothes and wore a long crimson scar around his neck. His clothing emphasized the solemnity and tradition of the event.

An estimated 250 of the faithful participated in the pilgrimage. There were many children who made the trek. Pilgrims included several young adults, many of whom are parents, some approaching middle age who already have grandchildren and perhaps a dozen or more retirees.

It was not an easy route pilgrims took. A steady, easy pace and the stops to recite the Stations no doubt helped make the walk somewhat less challenging. That most definitely made a difference as pilgrims made their way up some steep hills, the steepest of which was the final 100 yards from the Copper Verde Road road to the cemetery.

Being there when the pilgrims arrived gave one a better appreciation of the crowd’s size. It was more intimate than seeing the group from a distance. What was particularly impressive was the great number of grade school-aged children, who were at the forefront of those arriving. Also impressive was the number of children who participated in carrying the cross.

That may well have been the reason Holy Cross Parish Catechism teachers Theresa Campbell and Berta Leon wore big smiles and appeared to beam with pride as they assisted their students in lifting the cross and placing it next to the cemetery’s altar.

With that achievement, parishioners were welcomed to make comments. Jessica Gallegos, who is in her second year of teaching Confirmation classes, spoke of how endearing and rewarding it has been for her in teaching those classes. She said it has been an “enlightening journey in guiding kids in turning to God.”

Gallegos became quite emotional in describing her duties and gratitude for her experiences and, after briefly pausing to swallow the lump in her throat while also drying her tear-filled eyes, she emphasized the importance of religious education.

Following her remarks, Father Mma led pilgrims in a final recitation of the Stations of the Cross.

As far as the return journey from the cemetery, there were several vehicles already parked there for a trip to home or elsewhere.