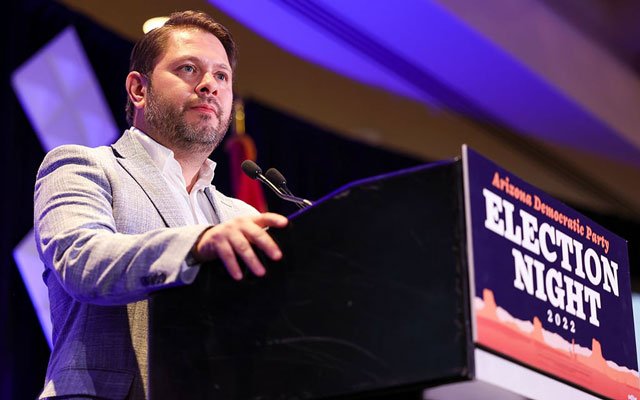 File photo by Mary Crace Grabill/Cronkite News: Rep. Ruben Gallego, D-Phoenix, speaks at an election party for Arizona Democrats in Phoenix on Nov. 8, 2022. Gallego, a five-term House member, announced Monday that he will run for the seat of first-term Sen. Kyrsten Sinema, who left the Democratic Party last month to become an independent.

The announcement by Gallego, now in his fifth House term, was not a surprise, but it complicates the 2024 election when Democrats will be looking to hold on to their slim Senate majority. Analysts said it’s too early to predict how Gallego’s announcement will affect the race, except that Arizona is likely, once again, to be a closely watched battleground state.

“From early public polling it’s clear that a Republican or a Democrat starts out in a stronger position than Sinema at this point, but what’s hard to say is who would win,” said Erin Covey, a reporter, and analyst at Inside Elections.

But longtime Arizona political consultant Bill Scheel said polling shows that Sinema’s standing has collapsed over the last year and that she has lost support from the Democratic base. He pointed to a recent Public Policy Polling survey that showed Sinema, as an independent, trailing both Gallego and possible Republican candidate Kari Lake, proof that Sinema is “fading into irrelevancy,” Scheel said.

Covey said that while Sinema is not polling well right now, polls should be taken with a grain of salt at this point in the election cycle. Sinema has not indicated whether she plans to seek reelection next year, but Covey and others said that if she does run, her chances will be heavily influenced by what Sinema does in the Senate over the next two years.

When asked for comment on Gallego’s announcement, Sinema staffers pointed to her interview Friday with KTAR in which she referenced voter weariness with politics.

“As I’ve been saying for months now, a never-ending focus on campaign politics is why so many people hate politics,” Sinema said. “We just got through a really grueling election cycle and I think most Arizonans want a break.”

It is not clear why Gallego chose to make his announcement now – a request for comment from his office was not immediately returned. But in a three-and-a-half-minute video posted to his personal Twitter account, Gallego said he was “sorry that politicians have let you down, but I am going to change that.”

The campaign video highlights his faith in the American dream, which he said has helped him rise from a childhood of poverty as one of four children of a single immigrant mother to a Harvard graduate and member of Congress.

“When you’re poor you really need a hope and a belief in a better future and what helps to do that is when you have other people believe with you,” said Gallego.

His campaign website talks about summer jobs as a youth and Gallego’s side job cleaning bathrooms for classmates at Harvard, where he was a military reservist. Gallego said he felt he owed a debt to the country and joined the Marine Corps, serving a tour in Iraq with a unit that suffered heavy casualties.

Gallego credits the government for believing in kids like him and for what “helping hands gave him and (people like him).” He entered politics after returning from Iraq, winning election to the Arizona State House in 2010 and to Congress in 2014.

In Sinema, Gallego faces an incumbent with her own up-from-poverty background. She has said in campaigns that her family struggled to get by when she was growing up, even being homeless at one point. She earned a bachelor’s degree from Brigham Young University and a number of master’s and doctoral degrees from Arizona State University, an education she said was made possible with help from student loans, financial aid, and academic scholarships.

Once considered a reliable member of the progressive wing of the Democratic Party, Sinema has steadily moved toward the center since being elected to the Senate in 2018.

With fellow moderate Democratic Sen. Joe Manchin of West Virginia, she has been able to block Democratic efforts to raise the minimum wage, help trim a massive infrastructure spending bill and halt efforts to do away with the filibuster, angering party liberals.

Manchin and Sinema raised eyebrows last week at the Davos World Economic Forum in Switzerland when they exchanged a high-five over their success in preserving the filibuster – a tool that Senate Republicans have used to block legislation even though a majority of the Senate approves it.

Scheel highlighted Sinema’s performance in Davos with Manchin, saying “it’s hard to imagine how she can consort with the economic elite like that in such fashion and believe that that helps her win an election in Arizona.”

Sinema announced in December that she would switch from Democrat to independent, but that she would not caucus with Republicans in the Senate, allowing Democrats to keep their slim numeric advantage in the chamber. Covey said that could allow Sinema to keep playing the outsize roles they have played in the Senate.

“Senators like Sinema can have a large role in impacting the Senate’s ability to get legislation done and impacting Senate Democrats’ ability to enact their own agenda,” she said.

Even if Sinema runs for reelection, Scheel believes the 2024 campaign will come down to a race between a Republican and a Democrat.

In the meantime, Gallego is a credible – and only – Democratic candidate for Senate. Rep. Greg Stanton, D-Phoenix, announced last week that he will not run for Senate next year. Stanton tweeted on Jan. 19 that, “after a great deal of consideration and talking through with the ins and outs of a Senate race with my family, I’ve made the decision that now is not the right time for me to run.”

Political analyst Kyle Kondik said Monday that, “The first step for Gallego is preventing other credible Democrats from running.”

Kondik, the managing editor for Sabato’s Crystal Ball at the University of Virginia’s Center for Politics, said he thinks that if Sinema runs, she will be a factor in the race, even if she is not a front-runner. The question is how much her campaign ends up pulling from the major party candidates, he said.