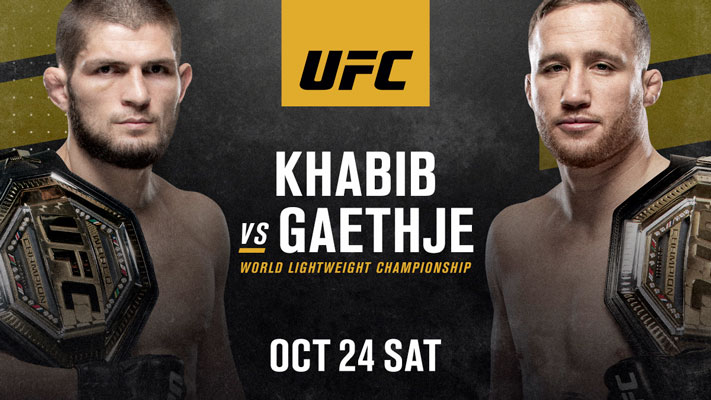 UFC Photo: The UFC has officially announced the title fight between Safford’s own Justin Gaethje and Khabib Nurmagomedov will be held at UFC 254 on Saturday, Oct. 24.

ABU DHABI – Moments after his biggest victory of his career to date, Justin “The Highlight” Gaethje tossed his Interim Lightweight Champion belt aside.

When commentator Joe Rogan asked him why he did that, Gaethje calmly replied, “I’ll wait for the real one.”

Now the kid from small-town Safford will get his chance to earn what he has been working for since he first began wrestling at just 4-years-old – to be the best in the world at his craft.

UFC President Dana White officially announced Gaethje (22-2, 5-2 UFC) will take on Khabib Nurmagomedov (28-0, 12-0 UFC) for the Lightweight Championship at UFC 254 on Saturday, Oct. 24. A venue has not been announced but the fight could possibly take place in Las Vegas, where the UFC has tentative events schedule or on “Fight Island” in Abu Dhabi, where the UFC has held its recent contests.

Gaethje is coming off his most dominant victory of his career after he completely destroyed Tony “El Cucy” Ferguson (25-4, 15-2 UFC) on May 9 with a TKO stoppage in the fifth round. Previously, Ferguson was on a nearly 8-year, 12-fight win streak.

Nurmagomedov last fought in September 2019, where he stopped Dustin Poirier (26-6) in the third round. His stated goal is to make it to 30-0 and then retire. If he is successful against Gaethje, the rumor is that a possible super match against UFC legend Georges St-Pierre could be his last match. However, Gaethje looks to play spoiler to that and again overcome the obstacles and make his ascent to the top of the MMA Lightweight Division and become a Safford legend.