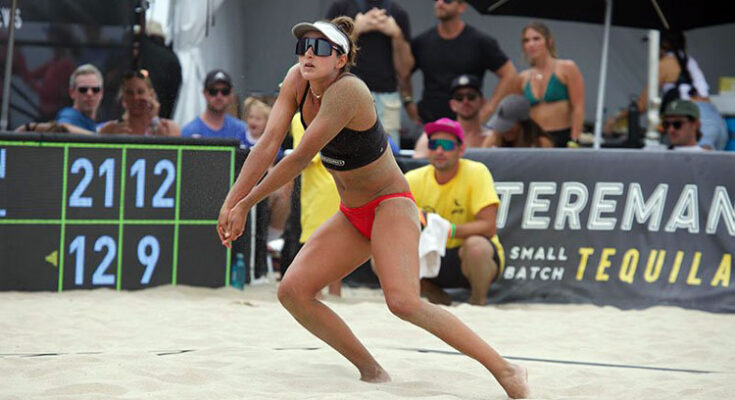 Photo by Matthew Legere/Cronkite News: Sarah Sponcil prepares to dig a ball in the second set of the championship match of the AVP Hermosa Beach Open.

The weekend volleyball spectacle drew large crowds. For the first time since 2019, the nation’s top beach volleyball players took to the sand to compete in the AVP Pro Series Hermosa Beach Open.

Sponcil and Terese Cannon entered the tournament having never won on the AVP stage.

Sponcil – a two-time Gatorade Player of the Year, two-time National Champion, and Tokyo Olympian – had all the accolades except an AVP title but entered the tournament with immense confidence. It paid off as Sponcil and Cannon took home the AVP Hermosa Pro Series title.

“It’s been a long time coming,” Sponcil said. “I was very emotional after that win. I love playing with T (Cannon), and I hope there are many more to come.”

Sponcil and Cannon dominated the quarterfinal matchup, winning 21-12 and 21-18 against Lauren Fendrick and Zana Muno. Fendrick is one of the most experienced players on the AVP tour, having made her pro debut in 2003.

Following the victory, the pair found itself just one win away from a chance at grabbing the long-alluded championship.

The semifinals proved to be the most thrilling match in the women’s bracket. Sponcil and Cannon had to fight for every point. A back-and-forth third set against Kelley Kolinske and Sara Hughes put many fans on the edge of their seats.

Yet, Sponcil and Cannon prevailed and were set to take on the No. 1 ranked American duo, Kelly Cheng and Betsi Flint, in the women’s final of the Hermosa Beach Open.

As the athletes took the sand, the energy in the arena was palpable. Fans were on their feet, eager to see who would take home the $125,000 grand prize.

Cannon had five monster blocks in the first set, and Sponcil did everything in her power to keep the ball off the ground. She completed 15 jaw-dropping digs and pushed her team to a dominating two-set victory.

“She gets locked and loaded, and there’s not a ball that can touch the sand,” Cannon said of Sponcil. “She digs everything, and it’s absolutely incredible.”

Following the final point, emotions ran high. Sponcil ran to hug her family members, who had been loudly cheering her on and proud all weekend.

“You’re always trying to win for your family,” Sponcil said. “They’ve been with me all week. They haven’t stayed with me that long before, so to be able to go talk to them after the matches was amazing.”

Sponcil has dreamed of competing on the world’s biggest stages since childhood, and her dedication to the sport is second to none. While many girls her age were playing with makeup and dolls, Sponcil worked on her accuracy by setting volleyballs into basketball hoops.

Her strong family values came from her parents, who would spend weekends driving their daughter to California to compete in beach tournaments. Although Sponcil got her volleyball start playing indoors at Veritas Preparatory Academy, she found a home in the sand. She attended Loyola Marymount University for three years and played indoor and beach volleyball before transferring to UCLA for her senior year.

While still in college, she was runner-up in her first appearance at the 2018 Austin Open. Her accomplishments at the high school, collegiate, and world stages have cemented her as one of the best defenders to play the game.

When speaking on their progression as a team, Sponcil said, ”We give each other the freedom to be ourselves and make mistakes. We are always supporting each other, and I think that’s huge going through all the ups and downs this sport has.”

Coming from a city that breeds talent, Sponcil, 26, is just getting started. She and Cannon will compete again in Fort Lauderdale starting Friday and will look to win back-to-back AVP Championships.