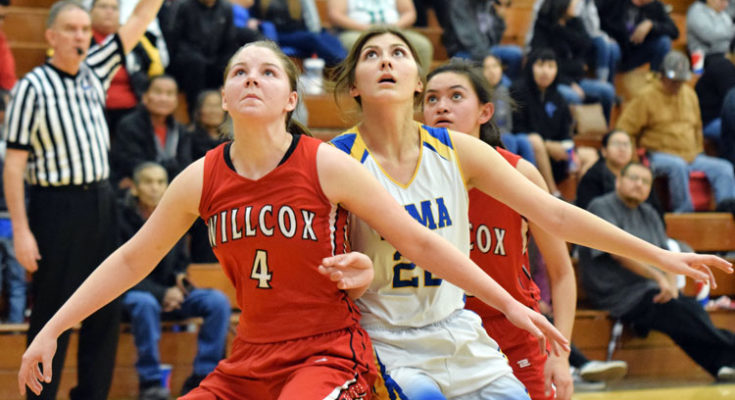 Top-seeded Safford beat third-seed San Carlos 52-35 for the title. Read our article on that game here.

Advancing in the consolation round were Willcox and Pima with wins of 42-24 over Morenci and 49-14 over Duncan, respectively.

It was a 4-point Fort Thomas advantage, 49-45, following a Normisha Moses free throw with 1:47 left to play. Three long distance field goals, two by Thatcher sophomore Karlee Lords and answered once by Fort Thomas junior Angel Wright, twice narrowed it to one, 49-48 with 1:39 and 52-51 with 52 seconds left.

A pairof Wright free throws with 20 seconds left raised the margin back up to three points, 54-51. Freshman Hailey Hinton made the third of a 3-shot free throw award with five seconds left to seal the win.

“We had a gut check after we didn’t do so well the day before against Thatcher,” Fort Thomas head coach Lee Haws said. “We are a young team with only three returnees with varsity game experience. Who was going to step up I asked.”

The Apaches responded. “We were on fire in the second half,” he said. “It was a character game.”

Willcox started out with a 5-0 advantage during the opening 2:05, scored by juniors Tapanga Alexander and Alma Barajas on 3-4 free throws and a field goal, respectively.

Pima made 1-4 free throws plus a Hailey Lofgreen 3-pointer to get within one, 4-5, before going ahead for good on senior Alani Blair’s field goal with 4:02 left in the opening period.

The Cowgirls twice tied, 9-9 with 37 seconds and 11-11 with no time left in the opening period, on 3-4 free throws by junior Jordyn Rhinehart. Willcox would not tie or lead during the rest of the game, getting within three, 25-22, with 3:55 left in the third period.

For Willcox, Rhinehart had 10 points on three field goals (one 3-pointer) plus 3-7 free throws. Barajas and sophomore Sydney Klump both had six points, Alexander five, and sophomore Ana Barajas two.

The Greenlee County showdown in Graham County had the white-clad Morenci Wildcats edging the gray-clad Duncan Wildkats by two points, 25-23, in the first half. Players on both teams received court time as the game progressed.

Morenci led 36-28 heading into the final eight minutes. The Wildcats doubled their fourth period output 14-7 to take to finish seventh.

It was the top-seeded Bulldogs’ 25th tourney finale appearance, the 16th title, and the fifth in arow. Safford won three straight from 1983-85 (8th-10th).

Beginning as a four-team, two-day meet with two games each day during the nation’s 1976 bicentennial year, the ensuing 42 tourneys included eight teams with four games in three days. Morenci defeated Clifton 55-42 for the title, after the Wildcats topped Thatcher 56-11 and the Trojans downed Safford 29-15 on the first day. Safford ended third with a 33-21 win over Thatcher.

Safford is 92-35 overall as the Bulldogs played only two games in the 1998 meet because the seventh-place game was not held.