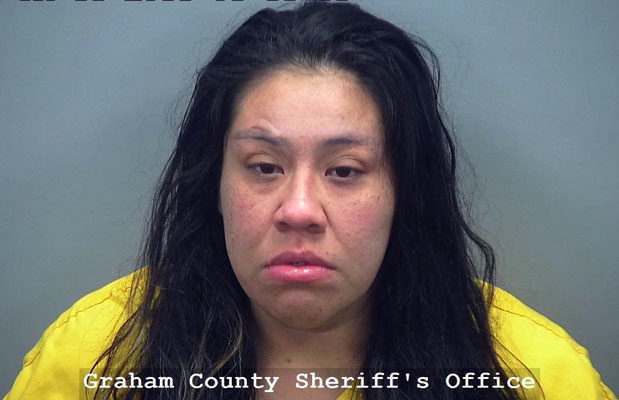 SAFFORD – The majority of domestic violence assaults are perpetrated against women, however, there are times when a man is the victim as well.

That is what occurred early Saturday morning at the Budget Inn hotel at 1215 W. Thatcher Blvd., according to authorities.

Officers were dispatched to the hotel at about 2:25 a.m. regarding a disorderly woman. As they approached the room in question, the officers reported a heavily intoxicated woman, later identified as Brittaney Anna Marie Chatlin, 29, of Tucson, exited while cursing at an occupant of the room.

The victim was found to have a bloody mouth, ripped T-shirt, and scratches to his chest. He advised that he was drinking alcohol with Chatlin when his phone rang and she began punching him in his face out of a belief that another woman was calling him.

Chatlin’s 13-year-old son advised he observed the assault and that he had been hit in his shin with a full can of beer thrown by Chatlin. He also said she broke the hotel’s television set, which was found on the floor with a cracked screen.

Chatlin denied the assault and criminal damage and refused to go with officers when they attempted to arrest her. According to a police report, she had to be forcibly secured to the back seat yet still attempted to kick the officers during transport to Mt. Graham Regional Medical Center (MGRMC) for medical clearance and spat at them several times.

A bedsheet was placed over Chatlin’s head at the hospital to eliminate the chance of her spitting on the officers or hospital employees.

At the hospital, Chatlin allegedly continued to repeatedly curse the officers and hospital staff and at one point attempted to bite a hospital employee. She was restrained to a bed and was later medically cleared for the jail.

On the way to the jail, Chatlin continued to resist and curse the officers and spit at them. She was secured into a restraint chair at the jail and was booked on two counts of assault, disorderly conduct, and criminal damage, all under the domestic violence moniker. She is scheduled to have her case adjudicated in the Gila Valley Consolidated Court under Judge Ned Rhodes.