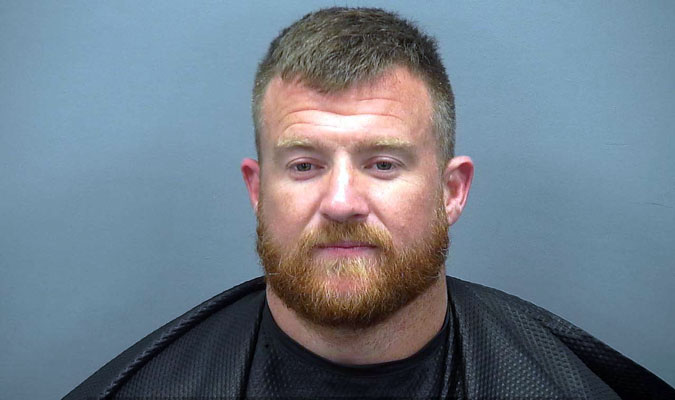 Contributed Photo/Courtesy GCSO: Sean Jacob Hinton, 37, was sentenced Monday to one year in prison for shoplifting to be followed by three years on probation for drug charges. He will also have to complete alcohol/drug counseling.

SAFFORD – Former Thatcher head football coach Sean Jacob Hinton, 37, was sentenced to one year in prison Monday after pleading guilty to a charge of solicitation to commit shoplifting – a Class-6 felony.

Hinton was also given a three-year probation term for his drug charges to be served upon his release from prison, and 10 days in jail along with one year of unsupervised probation on the DUI-drug charge. On the DUI charge, nine days will be suspended upon completion of alcohol/substance abuse screening, and he is also ordered to a treatment program within six months of sentencing. The year in prison and period of probation were stipulated in the plea agreement, however, the length of term on probation was up to the discretion of the court.

After graduating college, Hinton returned to the Gila Valley and joined the Fort Thomas High School football team staff, and was the boy’s head basketball coach.

Thatcher soon came calling, however, and Hinton signed on to teach physical education and weights at the high school while taking the reins of its football program as its head coach in 2015.

In July 2018 he was removed as Thatcher’s head football coach.

The following year, he was arrested by a Thatcher Police officer for DUI-drug, possession of a narcotic drug (heroin), and possession of drug paraphernalia. The charges stemmed from an incident the evening of May 20, 2019, in which he was stopped at about 11:36 p.m. for driving without his vehicle’s headlights illuminated.

During the stop, the officer deemed Hinton to be driving while under the influence of a drug and located a small amount of heroin and items related to the inhalation of heroin in his possession. During a blood draw, a second Thatcher officer noted that Hinton was “on the nod” meaning that he kept on falling asleep due to the effects of heroin while the officer attempted to take his blood. Lab test results from the Arizona Department of Public Safety showed the presence of morphine, THC, Carboxy-THC (a metabolite of THC), methamphetamine, and amphetamine in Hinton’s blood.

The second set of charges of possession of a dangerous drug (methamphetamine), possession of a narcotic drug (heroin), possession of a prescription-only drug, possession of marijuana, and three counts of possession of drug paraphernalia stemmed from an incident the afternoon of Nov. 17, 2019, in which Hinton was found smoking heroin in a truck with a female companion in an area behind the Haven Nursing home off Peppertree Drive. An anonymous caller informed police of a white pickup with people inside the vehicle doing drugs.

Upon arrival, a Safford officer located a white, Chevy pickup truck with Hinton inside along with a female driver. As Hinton rolled down the passenger window, a “large plume of smoke” came out of the truck and hit the officer in his face, according to his report. The officer noted that the smoke smelled like heroin.

Hinton reportedly admitted to smoking heroin in the cab of the truck and took ownership of a small amount of heroin located in a subsequent search, along with a small baggie of methamphetamine, a baggie of marijuana, a meth pipe, prescription anxiety medication and other pieces of drug paraphernalia.

When questioned why he was traveling with the various drugs, Hinton allegedly said that he has battled a bad heroin addiction for several years and he uses the various drugs to “balance out”. The officer also noted that Hinton “expressed a deep desire to break free of his addiction.”