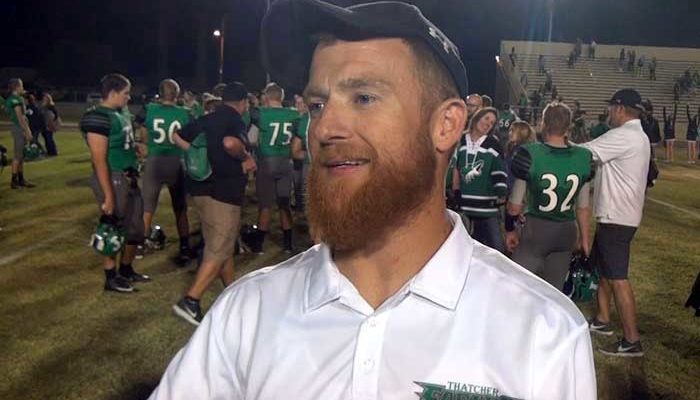 THATCHER – Former Thatcher Eagles’ head football coach Sean Jacob Hinton, 35, was arrested May 20 for DUI-drug after being pulled over for a moving violation.

According to a Thatcher Police report, an officer working the federally-funded Stonegarden program was at the intersection of U.S. Highway 70 and High School Avenue at about 11:18 p.m. when he noticed a sandrail-type vehicle exit the Twin Palms trailer park and head westbound on Main Street/U.S. Highway 70. The officer noted that the area has a high crime/drug rate and that the vehicle didn’t appear to have functioning taillights.

The vehicle then turned into the Giant Gas station at Stadium Avenue and the officer performed a traffic stop.

Upon questioning, Hinton allegedly said the lights were operated by a toggle switch and he had simply forgotten to turn them on. At that time, the officer noted that Hinton appeared to be under the influence of heroin.

The officer later asked Hinton if he would perform field sobriety tests and Hinton reportedly advised he would do so but not under the light of the gas station in view of the public and only if another officer was there to witness it as well.

The test was then conducted in a darker portion of the parking lot with another officer observing. According to the initial officer’s report, Hinton failed both the walk and turn and one leg stand portions of the test and, as he was explaining the third portion, it appeared as if Hinton was “on the nod”, meaning he was in an out of consciousness as if falling asleep and then catching himself, which is an indicator of opiate use. However, Hinton did pass the Rhomberg modified, horizontal gaze nystagmus, and lack of convergence portions of the test.

Hinton also denied recent drug use and said he couldn’t remember when or where he last used drugs. The officer then placed Hinton under arrest for DUI-drug and searched the vehicle for a tow inventory.

Inside a backpack found in the front seat, the officer located a piece of tin foil with apparent burnt drug residue, a small rubber tube, and the tube of a pen with brown residue. A small amount of unburnt brown, sticky substance that was also on the tin foil later tested positive for opiates.

There was also a large white pill that Hinton advised was a supplement. He declined to say anything about the alleged drug paraphernalia other than that he “didn’t use them.”

Thatcher’s certified phlebotomist then arrived at the scene and drew two vials of Hinton’s blood after he gave consent. The blood will be sent to an Arizona Department of Public Safety Laboratory for testing purposes. After the blood draw, Hinton was driven to his residence and released. His vehicle was towed from the scene and impounded.

At the end of his shift, the officer searched the back seat of his patrol vehicle and located Hinton’s wallet and a small amount of marijuana.

The next day, the officer located Hinton walking out of the Twin Palms trailer park and advised him about the wallet and small baggie of weed. Hinton, who reportedly does not have a medical marijuana card, denied concealing any marijuana. The officer advised that since he couldn’t prove Hinton placed the marijuana in the seat while in custody, the cannabis would be placed into evidence and marked for destruction.

Possible charges of possession of drug paraphernalia and DUI-drug are pending lab test results and review by the Graham County Attorney’s Office.

After guiding Thatcher to two consecutive state 2A titles in 2016 and 2017, Hinton was relieved of his duties as head football coach during the summer of 2018, reportedly due to an issue with substance abuse. (Gila Herald: Sean Hinton removed as Thatcher head football coach – July 3, 2018)

Thatcher has since completely parted ways with Hinton, and the former physical education and weights teacher is no longer associated with the school.

The Eagles completed a three-peat championship last year under head coach Ramon Morales, who had been a longtime assistant coach prior to his advancement.

Hinton is also a former player at Thatcher and was an all-state running back in each of his last three seasons and was named all-area MVP his senior year in 2002. That year, the Eagles repeated as state champions and Hinton was named MVP of the championship game.

He then joined Arizona State University’s football team, redshirting his first year in 2002 and becoming a member of the scout team.

After graduating college, Hinton returned to the Gila Valley and joined the Fort Thomas High School football team staff and was the boys head basketball coach. He then signed on to teach physical education and weights at Thatcher and became its head football coach in 2015.