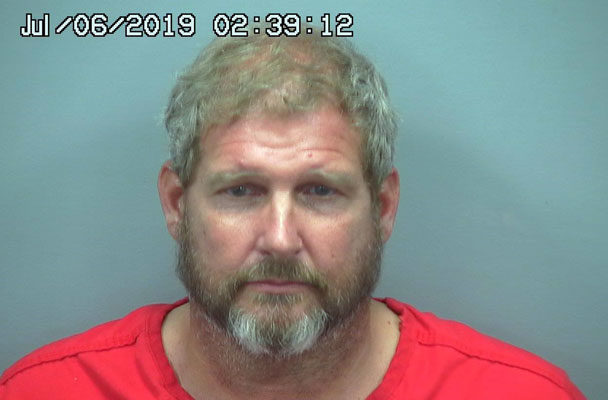 Contributed Photo/Courtesy GCSO: Justin Galemore, 50, has been charged with six counts of sexual conduct with a minor after he allegedly took advantage of a juvenile autistic girl and had a three-month-long affair.

GRAHAM COUNTY – A former Charleston, Missouri police officer who allegedly took advantage of an underage autistic girl for his own sexual gratification has been arrested and placed into jail.

Justin Douglas Galemore, 50, has been charged with six counts of sexual conduct with a minor by the Graham County Attorney’s Office. The charges are Class – 6 felonies.

Galemore appeared in front of Justice of the Peace District 1 Judge Gary Griffith for a preliminary hearing Wednesday but his attorney, Dennis McCarthy, waived the hearing and the case was bound over to Graham County Superior Court.

Prosecutors allege Galemore engaged in a variety of sexual acts with a juvenile special needs victim over the age of 15, who had previously been sexually victimized and as a result became highly sexualized, according to a Graham County Sheriff’s Office report.

In the reports, the victim is described as being high-functioning autistic but lacking the ability to make safe and rational decisions and is easily manipulated.

The incidents allegedly occurred from March 1 through May 9, while Galemore was employed by the victim’s family. Galemore, who described himself as a horse trainer and former police officer to the victim’s parents, lived on the property in his camper while he helped them with their horses. When the employers decided his knowledge of horses wasn’t up to snuff, they allowed him to stay on as a caretaker for their son, who is also autistic, after he passed a background check and received his clearance card from the Arizona Department of Public Safety. During his time of employment, Galemore was instructed of the victim’s issues and was told to stay away and make sure he was never alone with her.

When the victim’s mother became suspicious of Galemore, he allegedly told her that if the victim was to say anything nobody would believe her because he is former law enforcement. After the interaction, Galemore was told to leave the property and left to work a job in the Tucson area.

The next month in June, the victim told her mother about the relationship she had with Galemore and the Sheriff’s Office began its investigation.

Detectives learned that Galemore had been a police officer for the Charleston, Missouri Police Department from 1992 – 1995 and had left the department in good standing. A captain at the department said he was a friend of Galemore’s and that he still kept in touch with him periodically. The captain added that Galemore had never been accused of anything regarding sexual conduct with a minor in the past.

However, statements from the victim to investigators show how Galemore appeared to have groomed and manipulated her into an ongoing sexual relationship that lasted for three months, during which time he allegedly told the victim they would be married after she turned 18.

After investigators learned of the sexual conduct, they had the victim make a recorded phone call to Galemore on June 13, in which he commented about their sexual relationship. In the phone call, the victim also assured Galemore that she had kept her promise not to tell anyone about their relationship and Galemore reassured her that they would get married when she turned 18, according to the Sheriff’s Office report.

The case was then placed on hold until Galemore could be interviewed. In the late evening of July 5, Galemore arrived at the Graham County Sheriff’s Office at 11:30 p.m. to speak with an investigator regarding a separate issue. After that was concluded, the investigator on the sexual conduct case informed him of his Miranda rights and said he needed to interview him regarding a criminal matter. At that time, Galemore immediately requested an attorney, according to the report.

Galemore was then arrested at about 1 a.m. and booked into the Graham County Adult Detention Facility on a single charge of sexual conduct with a minor. The investigator noted that Galemore didn’t appear to be shocked at the charge and declined to make any statement about it. The investigator advised he would seek a warrant for Galemore’s camper, which is located in Tucson, to search for more evidence, including clothing from the victim and to forensically examine the camper’s mattress.

After reviewing the available evidence and Sheriff’s Office report, the Graham County Attorney’s Office charged Galemore with six counts of sexual conduct with a minor.