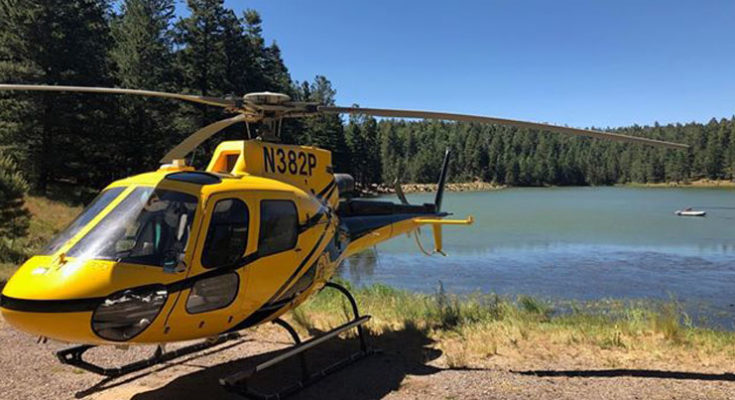 Contributed Photo By Mila Carter: A 10-year-old boy was airlifted off Mount Graham at Riggs Lake by an Air-Evac helicopter and was taken to a Tucson hospital, Thursday, July 4, after suffering a head injury in a bicycle crash.

MOUNT GRAHAM – An Air-Evac helicopter performed an extrication of a 10-year-old boy from Riggs Lake on Mount Graham on July 4, after the boy suffered head trauma from a crash.

According to a Graham County Sheriff’s Office report, the victim was riding his bicycle down a hill shortly before 12:30 p.m. when he fell into a concrete bench and sustained a head laceration to his left orbital socket.

The boy was disoriented after the crash and reportedly didn’t know where he was.

Air-Evac landed a helicopter next to the boat ramp at Riggs Lake and paramedics from Lifeline Ambulance and a Sheriff’s Office deputy assisted the Air-Evac crew in loading the boy into the helicopter. He was then flown to Banner – University Medical Center Tucson for treatment.

According to an update from family members, the boy is recovering well from his harrowing experience.