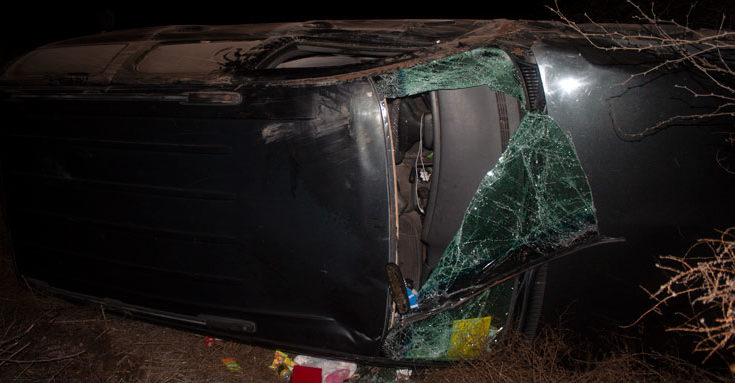 Jon Johnson Photo/Gila Herald: This SUV rolled down a roughly 30-foot embankment with seven passengers before coming to a rest on its side. Five of the occupants were transported by ambulance to Mt. Graham Regional Medical Center but all managed to self-extricate themselves from the wreckage and climb back up the embankment.

Alcohol may be a contributing factor in crash

FORT THOMAS – It was a busy Wednesday night for first responders as numerous ambulances, firetrucks, and police agencies responded to a crash site off River Road northwest of Fort Thomas on the other side of the Gila River.

Graham County Sheriff’s Office deputies were dispatched to the scene at about 7:30 p.m. and were joined by an Arizona Department of Public Safety trooper, an officer with the San Carlos Police Department, multiple fire trucks from the Fort Thomas Fire Department and five ambulances.

The area is in the wilderness north of Geronimo, and, at first, it was not known if it was on the San Carlos Apache Reservation but was later deemed to be just east of tribal land.

Upon arrival, a blue Chevy Tahoe was located at the bottom of a 30-foot embankment off the side of the road. The vehicle’s seven passengers had already self-extricated themselves from the SUV, which had come to rest on its side, and climbed back up the embankment before the arrival of first responders.

According to a Graham County Sheriff’s Office deputy, out of the seven occupants in the vehicle – both adults and juveniles – five were transported to Mt. Graham Regional Medical Center for treatment and evaluation. A child’s safety seat was seen dislodged inside the vehicle.

A news release sent out Thursday afternoon listed the driver as Jasmine Soto, 22, of Peridot, and said there were two other adults in the vehicle with her along with four children ages 1- to 4-years old. None of the injuries were listed as being life-threatening.

According to evidence at the scene, the SUV was westbound when it swerved to the south and went flipping down the embankment. Multiple open and unopened 24-ounce cans of raspberry-flavored Twisted Tea were located in and around the wrecked vehicle. Twisted Tea is labeled “hard iced tea” and contains 5 percent alcohol by volume. The crash site also smelled heavily of alcohol.

The crash is under investigation by the Sheriff’s Office, which reported that alcohol may have been a factor.

This article was updated at 12:55 to include information from a Graham County Sheriff’s Office news release.