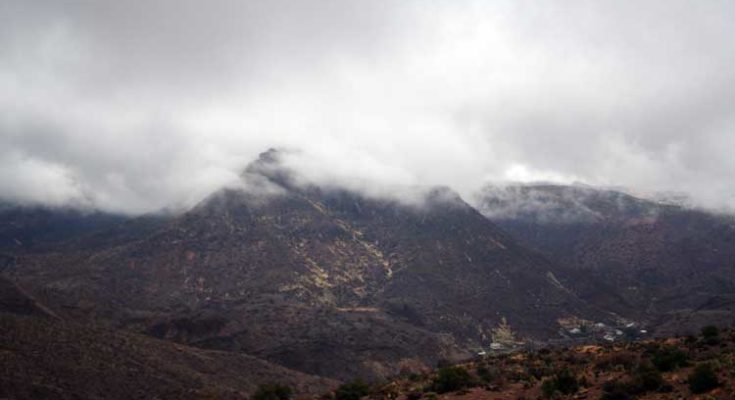 Photo By Walt Mares: Clouds hang over mountain peaks around Clifton on Friday, Feb. 16. Rain began falling Feb. 14 and continued long enough to saturate the very dry terrain in the Morenci, Clifton, and Duncan areas. The last significant rainfall in Greenlee County was in July 2017.

CLIFTON – There was a mud puddle. So what is so significant about that? Actually, the puddle was indeed important in that it was the result of the first significant rainfall in Greenlee County since July 2017.

It has been dry, dry, dry around these parts. All there has been is what one Clifton old timer used to refer to as “Arizona Rain,” meaning dust storms.

The recent storm dropped 1-3/4 inches of rain, according to James Hogan, a climatologist at the Freeport McMoran Morenci copper mine. The storm first hit on Wednesday, Feb. 14, and lasted four days. Noticeable rain, which means requiring the use of windshield wipers, first came down in the Safford area around mid-afternoon. Safford, 45 miles from Clifton, is in neighboring Graham County.

Enroute to Safford via the Black Hills, motorists encountered very light rain, the kind that initially muddies windshields and requires using the mechanism that sprays water on a windshield to more or less wipe mud from the window. That was undoubtedly the case for most vehicles as the dry weather caused at least some dust to settle on windows during the long dry spell. A combination of the light rain and existing dust made for muddy windows.

By around dusk, the rain in Safford increased. On the return trip to Clifton, heavier rain was falling in the Black Hills. By the time one reached the El Puente (bridge) spanning the Gila River, there was a panorama of York Valley and the surrounding mountains were becoming cloud covered.

By the next day, measurable rainfall was coming down in Greenlee County. On Friday, Feb. 16, the sky was completely overcast over Duncan, Clifton, and Morenci. The mountain peaks surrounding Clifton and Morenci were completely cloud covered. In fact, the clouds came down so low the “lifts,” that look something akin to giant benches, were almost completely obscured by clouds. The lifts are part of a stockpile dump seen when traveling from Clifton to Morenci on U.S  Highway 191.

“The ground was so very dry no doubt the rain made quite a difference for all the vegetation in the area, from scrub brush, cacti, mesquite trees and gardens at home,” said Clifton Town Manager Ian McGaughey.

“Besides curbing all the dust we’ve been experiencing for these past several months, the smell of rain on the dry dirt was darn near enchanting. I’d call it almost a fragrance rather than a smell,” he said.

McGaughey spoke of sitting on his front porch during the rain, closing his eyes “and just breathing it all in. It was wonderful.”

There remained some partial cloud cover over Greenlee through part of this week. By Thursday, skies were a clear and bright blue. Not even a trace of a cloud was visible.

“Weather can be so unpredictable and one hears or reads that another storm may be coming, but that is basically only hearsay,” McGaughey said. “I don’t think anybody would mind seeing more clouds and more rain.”

During and subsequent to the storm temperatures had dropped but not significantly.

“There is a definite chill at night and even during the day, but I think that’s mostly due to the wind that keeps coming up,” McGaughey said. “The wind and even the breezes have a bite to them that has people wearing coats and sweaters. I’ve certainly been wearing something warm when I go outdoors.”