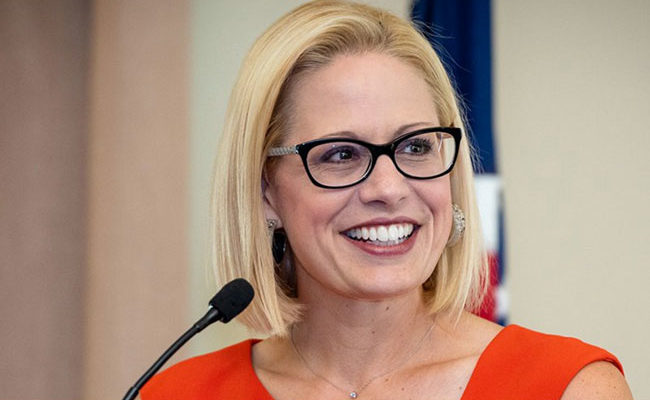 Photo Courtesy U.S. House of Representatives: Sen.-elect Kyrsten Sinema will be the first female senator from Arizona, and the first Democrat in more than two decades when she is sworn in next week as part of the 116th Congress, which has record numbers of women and minorities and a number of significant firsts.

WASHINGTON – When Sen.-elect Kyrsten Sinema is sworn in next week, she will be the first woman to represent Arizona in the U.S. Senate – a distinction that barely stands out in a Congress filled with firsts.

Several states are sending their first women representatives, or gay, or Latina or African-American women to Washington next month.

Arizona will send not just its first, but its second women to the Senate, after Gov. Doug Ducey last week appointed Rep. Martha McSally, R-Tucson, to fill the late Sen. John McCain’s seat.

This Congress will have the most women ever, in both the House and Senate, and will include the first two Native American women and the first two Muslim women to be elected at the federal level.

Congress still has a way to go before it reflects the country: Despite the gains, women, blacks, Hispanics and Native Americans will still be represented in the next Congress at only about half their share of the general population.

But most advocates and experts still call the gains a welcome step forward.

“It’s important (to have representation) both for inspiring people to think, ‘Oh, they can be part of Congress,’ but also sometimes it’s actually really important for the group to have somebody to go to,” said John Fortier, director of the Bipartisan Policy Center’s Democracy Project. “And that person is seen as an entryway to getting issues in the Congress.”

The change started even before November’s elections, when a record 476 women ran in House primaries and 53 ran for Senate, well over the previous records of 298 in 2012 and 40 in 2016.

Latinas, African-American, Asian and Pacific Islander, Native American and multiracial women made up 34 percent of those who advanced to the general election in House races, a number comparable to 37.2 percent of women of color in the general population, according to the Center for American Women and Politics at Rutgers University.

Winning women also set records, with 25 incoming female senators and 102 House members, up from previous records of 23 and 85, according to CAWP. Of those, 47 will be minority women.

They include the first Native American women to serve in Congress, Deb Haaland of New Mexico and Sharice Davids of Kansas, and the first Somali-American, Minnesota’s Ilhan Omar, who is also one of the first two Muslim women elected, with Rashida Tlaib of Michigan.

For Shannon O’Loughlin, executive director of the Association of American Indian Affairs, the elections of Haaland and Davids “represent a change, how the United States really respects diverse voices and ideas, and diverse backgrounds.”

“I think they represent an opening of America’s eyes and minds with hearts,” O’Loughlin said.

That was echoed by Colin Christopher, director of the Office of Interfaith and Community Alliances of the Islamic Society of North America.

“Tlaib and Omar really represent what our country is. That’s two incredible personal stories of perseverance, of integration of people … under difficult circumstances and bringing the values of equity and justice to the larger society,” he said.

“We are particularly proud given their values as Muslims that are going to be translated into the public square in a way that I don’t think many people in this country have seen,” Christopher said.

Bringing those different perspectives was already happening on the campaign trail with “the way motherhood was on the front lines,” said Amanda Hunter, communications director at the Barbara Lee Family Foundation.

“We know from our research that in the past voters have been very concerned about women’s ability to balance caring for children and doing a job as an elected official,” she said. “We saw women really talk about motherhood in a way that we haven’t seen before and they changed the conversation.”

But Hunter said women still have to “work twice as hard to prove to voters that they’re qualified.”

Party played an outsized role in this election, where the majority of diverse candidates came from the Democratic Party, Fortier said. But even within the parties there was a surge of minority candidates in the primaries, he said.

He pointed to losses by Democratic Reps. Joe Crowley of New York and Michael Capuano of Massachusetts to Alexandria Ocasio-Cortez and Ayanna Pressley – the first black woman to represent Massachusetts in Congress.

“In the primaries, with both the loss of Joe Crowley in New York and Michael Capuano in Massachusetts to younger, minority, progressive candidates, that was more of a generational and identity changing than it was about policy,” he said.

While the change from the current Congress to a more diverse one helps “support our diverse country, we still have a long way to go,” O’Loughlin said.

Four states – Alaska, Mississippi, North Dakota, Vermont – have never sent a woman to the House. Vermont has never elected a female senator, either.

“It’s possible for women to relaunch themselves and voters say they won’t penalize a woman for having lost a race,” she said. “A woman can start to relaunch herself as early as her concession speech.