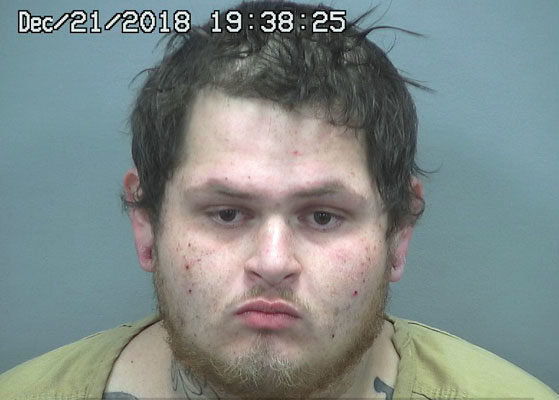 Contributed Photo/Courtesy GCSO: Niko Imrich, 23, was arrested and booked into the jail on narcotic drug charges and DUI.

SAFFORD – A shoplifting investigation led to the arrest of a self-admitted heroin dealer on drug and DUI charges Friday, Dec. 21.

According to a Safford Police report, Imrich was driving an older, yellow Ford truck southbound on 8th Avenue when the officer realized the truck was one that had been involved in a recent shoplifting incident at Walmart. Imrich himself is also currently being adjudicated for a separate shoplifting incident that occurred in November.

The officer followed the truck as it eventually pulled into the parking lot of the GS Market just north of Relation Street and then made contact with the driver, who was identified as Imrich. The front seat passenger, Flores, was identified as being on Walmart surveillance video stealing two Nintendo game units from the electronics department.

Flores was questioned about the theft and allegedly admitted to doing it and fleeing with Imrich, who was driving the truck. Flores said he committed the crime because he was “sick” and needed a “fix” of heroin. He said he traded the electronics for 2 grams of heroin from a man he only knows as “Bones” in Thatcher.

During the traffic stop, officers located various drug paraphernalia Flores admitted was his, including a burned pen body, a syringe, piece of cotton, and a spoon.

Officers also located a black lockbox. Imrich allegedly admitted drug-related items were in the lockbox and gave the officer the combination. Inside, they found it contained a green container with .2 of a gram of heroin and 21 separate baggies in a separate bag, each with approximately .2 of a gram of heroin inside, which adds up to 4.4 grams of heroin. The lockbox also had several pieces of drug paraphernalia, including two multi-colored glass pipes, two baggies of cotton, eight syringes (seven unused), a spoon with drug residue, and a cell phone with drug text messages.

Imrich also advised that he is also a heroin user and ingests about a gram per day. An attempt was made to take his blood for DUI testing purposes, and Imrich said heroin would be found in his system but he didn’t believe he was currently altered while driving.

Due to the numerous track marks, the certified officer phlebotomist wasn’t able to procure any blood from Imrich. He was then taken to Mt. Graham Regional Medical Center, where it took six attempts before a blood sample was obtained. Imrich was then transported to the jail and booked on his above-listed charges.