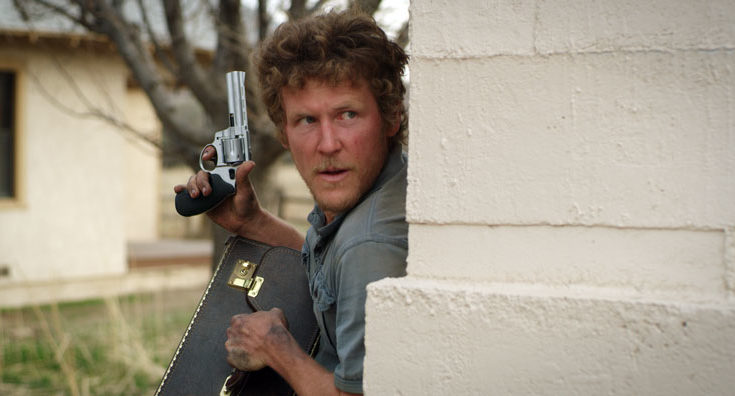 Contributed Photo: ‘To Hell and Gone’, an independent feature film shot in Safford and Klondyke and starring Carr Cavender, will have its world premiere in Tucson on April 13.

TUCSON – “To Hell and Gone”, an independent feature film shot mostly in Safford and Klondyke, will have its world premiere at the 28th annual Arizona International Film Festival on Saturday, April 13, at 7 p.m. in Tucson.

Click here to see a clip of the movie and here to purchase tickets to the show.

The movie is a modern western thriller starring Tucson native Carr Cavender and is directed by Kyle Moore, who also penned the screenplay. Both men also produced the film, which was crowd-financed on Indiegogo. See the Gila Herald’s article on the shoot last year here.

The production shot scenes in Safford in March 2018, utilizing the El Coronado restaurant as well as Main Street for a fight scene and stunt work that also included a cameo by Safford Police officers. After shooting some more action in the parking lot of the Stargazer 5 movie theater, the production moved to Klondyke, where it utilized a ranch owned by Cavender’s family. The film also utilized family in Oro Valley, which is just north of Tucson. Cavender previously told the Gila Herald that after his parents began purchasing property in Klondyke in the 1990s they would make regular trips to the area. Later on, he remembered the site and thought it would make a great set for a movie.

“They slowly accumulated enough land and structures out there that it’s the perfect place to house a crew, shoot a movie and have that stuff going on,” Cavender said.

“It’s a modern crime but in an old west setting,” he said.

What: “To Hell and Gone” world premiere

Where: The Screening Room – Tucson