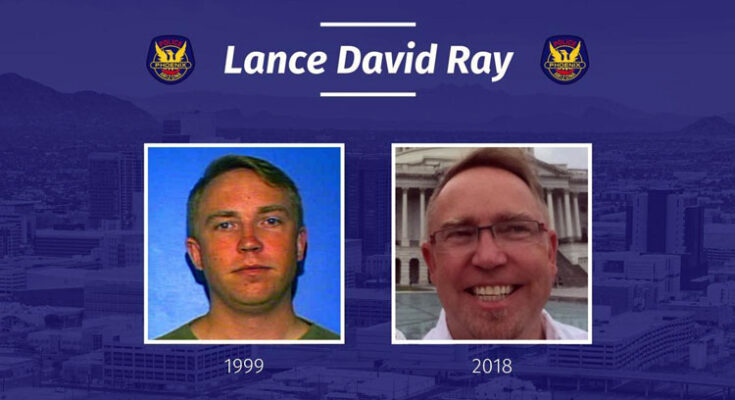 Photo By Phoenix Police Department: Authorities believe Lance David Ray committed homicide and other crimes in the Phoenix area in 2000. The FBI believes there may be more victims as well.

PHOENIX – The Federal Bureau of Investigation (FBI) is looking to see if there are any additional victims regarding a cold case homicide suspect who was recently arrested.

Lance David Ray, 53, was recently arrested in connection with three separate incidents from the Phoenix area in 2000, including homicide, kidnapping, and sexual assault.

According to a joint press release from the FBI, Phoenix Police Department, and Peoria Police Department, Ray is believed to have kidnapped a 14-year-old boy from Peoria in 2000 and held him at gunpoint while sexually assaulting him. A month later, in the first of two Phoenix incidents, police believe Ray kidnapped, bound, and sexually assaulted a 17-year-old at gunpoint. The second Phoenix incident involved the killing of Dalmer Hussen, 18, who reportedly had left a friend’s house to walk home and was found the following morning fatally shot in an empty lot.

Earlier this year, DNA evidence linked Ray to the crimes and he was arrested in October while he was visiting Bloomington, Indiana. Ray was then extradited back to Phoenix and booked into the Maricopa County Jail.

If you believe you or someone you know may have information regarding Lance David Ray, email ReportRay@fbi.gov or call 1-800-CALL-FBI. The release requests those who email to provide their name, date of birth, phone number, and address.

“We would like to thank all of our partners who have helped in this investigation, including FBI St. Louis, FBI Los Angeles, and FBI Indianapolis,” the release stated.