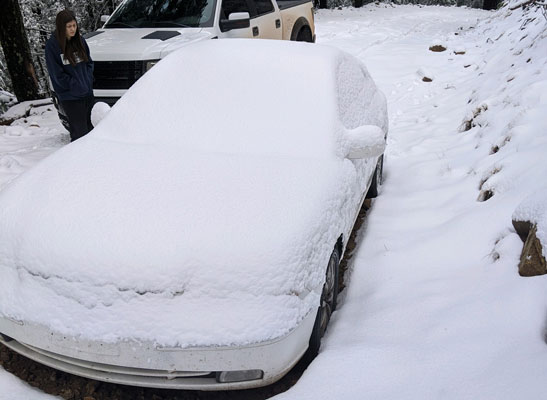 Photo Courtesy of Blain Brown: Raely Brown examines an abandoned car she and her father, Blain Brown, came upon during their trip up to West Peak on Mount Graham to enjoy the first snow of the season. The driver was later found suffering from severe frostbite and hypothermia.

MOUNT GRAHAM – Since he was a boy, Blain Brown has had a tradition of heading up the West Peak of Mount Graham the first time it snows for the season. On Thursday, his adherence to that tradition likely saved a man’s life.

“Me and my younger brother, our whole entire lives – even before we were old enough to drive – it didn’t matter if it was day or night, when snow hit Mount Graham on the west end we had to make the first tracks,” Blain said. “We would always take a six-pack of Pepsi and a bag of Doritos and our sleeping bags if it was dark because we got stuck a lot . . . As long as I’ve lived in the Gila Valley, I’ve (always) gone.”

Blain had plenty of work responsibilities to perform on Thursday, but his daughter, Raely Brown, who had school herself, prodded him enough that the pair embarked to go up and enjoy the snow.

On his way up, Blain noticed another vehicle had already started out and he gunned his truck to hurry up and catch whoever was ahead so he could be the “first to make tracks” in the snow near the top. The other vehicle pulled off down a lower road, and Blain and Raely continued their ascent, taking pictures of the winter wonderland as they went.

Then, near the top of West Peak about a quarter-mile before the lookout tower, the Browns came upon a white, Hyundai sedan buried in the snow.

“I got this sick feeling in my stomach and I thought, ‘somebody is in trouble’,” Blain said.

After looking inside the vehicle for an occupant and finding it completely empty, the Browns headed back down to where they had cell phone service and called County Dispatch. Blain had taken pictures of the car, including the license plate, and it came back as being reported stolen. However, a man who had permission to use the car, Edward Griffith, of Pima, was also reported missing since Monday. Edward “Fast Eddie” Griffith was one of the co-stars of the SyFy Channel show “Ghost Mine”, which ran for two seasons in 2013 and was centered around an abandoned mine in the remote woods of Oregon.

With the area around the car being pristine, it was obvious that it was driven there and the driver had left it prior to the snowfall. The owners were contacted and they advised they would attempt to recover the car from the mountain. However, a Graham County Sheriff’s Office deputy decided to see if he could make it up to the vehicle and headed that way.

After receiving instruction from Blain about where the car was located, the deputy in his patrol vehicle and a Pima officer in his truck slowly traveled up the snowy, dirt road. Roughly three-quarters up the road, the deputy reported that something off the shoulder caught his eye as not appearing normal just before the Dry Lake Campground. The officers stopped and located Griffith balled up in a fetal position wearing bluejeans and a plastic bag over his chest and back. Griffith didn’t have any shoes on and appeared to have severe frostbite to his hands and feet. He also appeared to be suffering from hypothermia.

Griffith couldn’t talk at first but later advised he had been on the mountain for three days without food or water. He said he drove the car to the point where it could not go any further and decided to walk out but left the road and got lost. He later found the road and was then discovered by law enforcement.

Griffith was placed into the Pima officer’s truck and, since helicopters were not able to fly in the weather, they began to drive him back down the mountain. Part-way down, they met up with a member of the Pima Rescue team, which hopped into the Pima Police truck and attended to Griffith until they met up with Lifeline Ambulance. Griffith was then transported by Lifeline Ambulance to Mt. Graham Regional Medical Center, where he was placed into the Intensive Care Unit in stable condition.

Law enforcement later advised Blain that it appeared that had Griffith been found just two hours later, he likely would have been deceased.