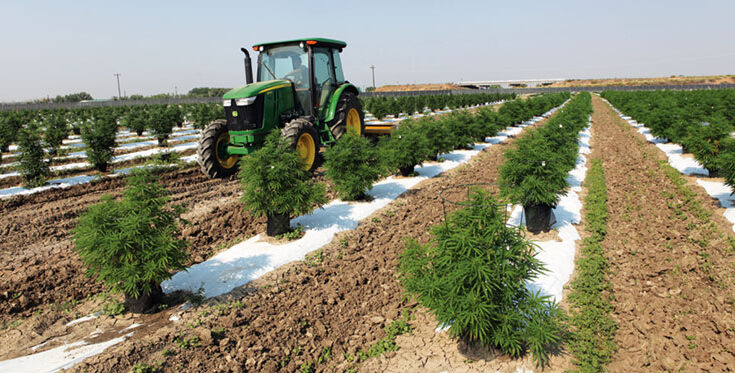 Photo Courtesy Los Sueños Farms: An outdoor cannabis farm like this one in Colorado could grow to fruition in Eden if approved by the Graham County Board of Supervisors.

EDEN – The Graham County Board of Supervisors will soon decide if Graham County is ready for its first-ever legal commercial cannabis farm.

On Wednesday, the Graham County Planning and Zoning Commission voted 5-1 to approve a zoning change to the M-X Unlimited Manufacturing Land Use Classification request to allow a commercial cannabis farm of between 35-37 acres in Eden.

Clint Colvin, of Colvin Farms, requested the zoning change to grow on one of his farms in Eden. Colvin has already dipped his toe in the hemp market by successfully harvesting a 100-acre hemp farm the past two seasons. Hemp contains little to no THC (Delta-9 tetrahydrocannabinol), which is the active ingredient in cannabis that provides the high when users ingest it. Hemp is used in a variety of products, including medical use for inflammation, while popular strains of some medical cannabis and recreational cannabis have THC levels of around 20 percent or slightly higher.

According to Colvin, the outdoor-grow cannabis farm will be surrounded by a solid, 10-foot fence as required by the state of Arizona, and will feature more than 100 high-resolution security cameras to deter unwanted guests.

Arizona recently began the sale of recreational cannabis after Proposition 207 overwhelmingly passed last year, which essentially legalized cannabis for adults 21 years old and older. Individuals are also allowed to grow their own cannabis plants but are limited to no more than six plants at their residences and the plants must be within a lockable, enclosed area and beyond public view.

Arizona voters previously passed the Arizona Medical Marijuana Act in 2010 that allowed for residents with specific medical conditions to be treated with marijuana. After that passage, the Arizona Department of Health Services was tasked with approving medical cannabis cultivation sites and dispensaries.

In January, the state initially approved 73 medical dispensaries’ requests to sell recreational cannabis with its medical cannabis as well. Recreational cannabis sales are taxed at 16 percent on top of existing transaction privilege tax and use tax. Revenues from the 16 percent tax will be divided between community college districts; municipal police, sheriff, and fire departments; fire districts’ the Highway User Revenue Fund, and a new Justice Reinvestment Fund.

Colvin told the Gila Herald that unlike hemp, cannabis with THC is regulated more strictly and no part of the plant can leave the farm unless it is licensed to do so. The crop would be processed on site and then transported to Phoenix. There will be no local sales from the farm.

Unlike a previous request last year from Bayacan, Inc. to rezone an area of a greenhouse at NatureSweet in the Bonita area, Colvin’s farm will be an outdoor grow and there has been no dissent from any of his neighbors in Eden about the proposed farm. In actuality, he advised that some of his neighbors spoke on his behalf at the commission meeting and one who lives nearby didn’t even know he currently farms hemp.

The Board is scheduled to have Colvin’s request on the agenda in April.