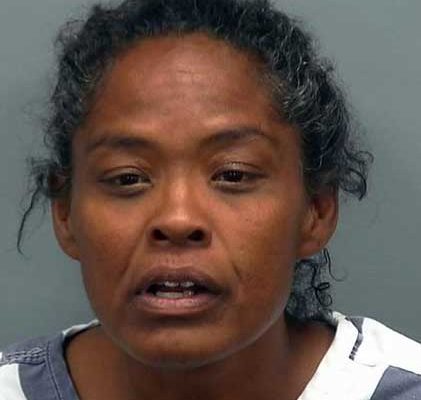 Contributed Photo/Courtesy GCSO: Evelyn Young was booked into the jail on trespassing and alcohol charges.

SAFFORD – A homeless woman found her self back behind bars Sunday, March 25, after getting caught drinking at Firth Park.

Evelyn Espinoza Young, 43, was arrested and booked into the Graham County Adult Detention Facility on charges of criminal trespass in the third degree, consuming alcohol in public, and having alcohol in the park.

A Safford officer was dispatched to Firth Park at about 12:57 regarding a possible assault. Upon arrival, the officer located Young and another homeless individual who had a swollen right eye. Young was seen consuming an alcoholic beverage, and when the officer questioned her about the other individual she allegedly grew irate and said, “I told this (expletive deleted) to get his (expletive deleted) out of the dirt.” And with that Young reportedly threw her beverage into the garbage can and left the scene on foot.

The officer then learned that the second individual’s injuries were caused the previous night and he had been picked up by paramedics outside of the Bull Pen bar and taken to the Mt. Graham Regional Medical Center for treatment. The individual declined further medical treatment and said he hadn’t been assaulted again.

Shortly thereafter, an officer received a dispatch call to the Shining Times Carwash regarding Young panhandling there. However, by the time officers arrive Young had already left.

Thatcher officers were then dispatched to Safeway regarding Young being disorderly there. After Graham County Dispatch confirmed Young had previously been trespassed from Firth Park for drinking alcohol there, a Safford officer located Young at the Beverage Palace at 1930 W. Thatcher Blvd. and placed her under arrest.

During booking, the officer noted that Young was disorderly with staff and used vulgar language while calling the jail staff obscene names.

Young has been arrested numerous times, mostly for trespassing, disorderly conduct, or alcohol in public violations, but she also has a history of violence and an assault on her rap sheet. Young reportedly suffers from a mental illness and chooses to live her life homelessly.