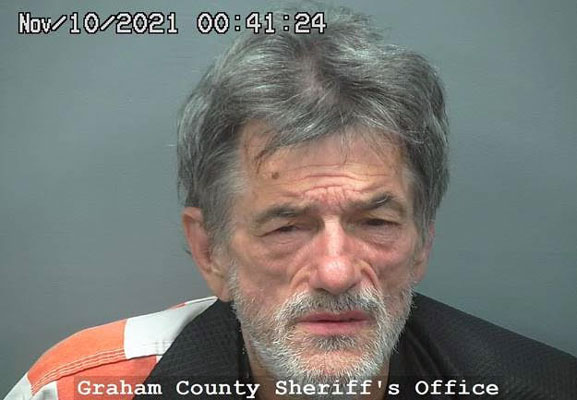 Contributed Photo/Courtesy GCSO: George Houser has been charged with aggravated assault after striking an officer in his face with a canned food item.

George Leon Houser, 60, of Thatcher, was arrested the morning of Nov. 21 on charges of threatening, endangerment, and aggravated assault. He got the last charge by allegedly striking a deputy in his face with an unopened 28-ounce can of red enchilada sauce. The shot caused initial blindness in the deputy’s right eye, according to a Graham County Sheriff’s Office report, and took several minutes to come back. The deputy’s vision then remained blurry for some time afterward.

After a review of the case, the Graham County Attorney’s Office charged Houser with aggravated assault on a police officer and threatening or intimidating.

Authorities were initially dispatched at about 7:48 a.m. On Nov. 21 to a residence in the 800 block of S. First Avenue for a welfare check. According to a Sheriff’s Office report, the person who requested the welfare check said Houser was identifying himself as God and was threatening other people, calling them demons and saying they were going to go to hell and not making sense. Houser had a mental health evaluation the previous day at Mt. Graham Regional Medical Center but he left the hospital against staff direction.

Upon arrival, Houser refused to answer the door and instead soon after began throwing canned food through his windows at the officers, breaking the windows.

A crisis caseworker was called to the scene but due to their policy, he could not approach the residence, according to a Sheriff’s Office report. The caseworker then requested officers take Houser back to the hospital so he could begin the process for a Title 36 mental health order where a patient is in need of a period of treatment because the patient, as a result of a mental disorder, is a danger to self or others or has a persistent or acute disability or a grave disability. This is done when a patient is unwilling or incapable of accepting treatment voluntarily.

While this was transpiring, Houser was allegedly placing more cans of food and broken glass at the entryway of his residence and told the officers that he was getting an arsenal together for them. He also threatened to burn down the house and showed officers his lighter.

Additional police units from Safford, Thatcher, and Pima Police Departments arrived to assist the Sheriff’s Office, who made the decision to enter the residence through the back door to take Houser into custody for his own safety.

Houser began to react and went to throw more canned food items when two Sheriff’s Office personnel grabbed him through the broken window and held him against the inside wall of the residence through the window.

Houser resisted and struck a deputy in his face with a can of enchilada sauce, but the deputy hung onto him. The second officer’s flashlight pressed into him while he was lying across the window and possibly caused a bruised rib. However, the two men continued to hold Houser long enough for other law enforcement personnel to enter the house unharmed and take Houser into custody without further incident.

He was then taken to MGRMC, where the crisis team caseworker said Houser had not yet met the criteria for them to perform a Title 36. Houser was then cleared from the hospital and booked into jail.