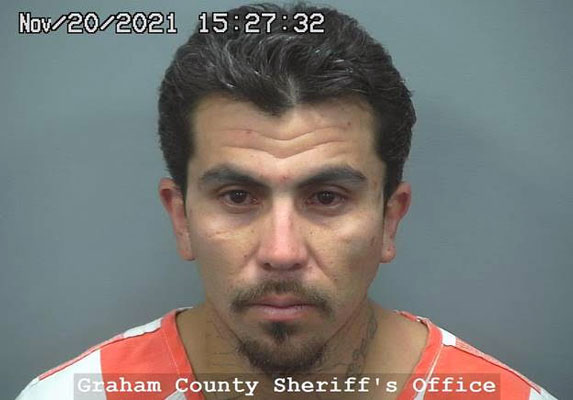 SAFFORD – Christopher Jacob Garrobo, 32, of Safford, was apprehended on Nov. 20 with what he described as a “date rape drug.”

Garrobo was wanted on an active warrant regarding charges of aggravated assault and endangerment.

According to a Safford Police report, an officer was informed around 1:12 p.m. of a possible domestic dispute involving a man later found to be Garrobo. The tipster said Garrobo was walking northbound on 14th Avenue and a woman was following him in a car.

Upon initial contact with the officer, Garrobo said his girlfriend had been following him during an argument but he walked away to avoid conflict. After Garrobo identified himself, the officer went back to his patrol vehicle and learned of the active warrant.

The officer then contacted Garrobo again and arrested him on his warrant. A search of a bag Garrobo had in his possession yielded a “bong” he said he uses to smoke methamphetamine and a vial of liquid that Garrobo believed to be GHB (Gamma-Hydroxybutyric Acid), also known as the “date rape drug”, according to the Drug Enforcement Agency (DEA).

According to the police report, Garrobo said he had tasted the substance in the vial himself but didn’t elaborate on what he had planned to do with it.

Garrobo was then booked into jail on his warrant, with long-form charges to include possession of drug paraphernalia and other appropriate charges after the liquid in the vial is tested at the Arizona Department of Public Safety Crime Lab in Tucson.