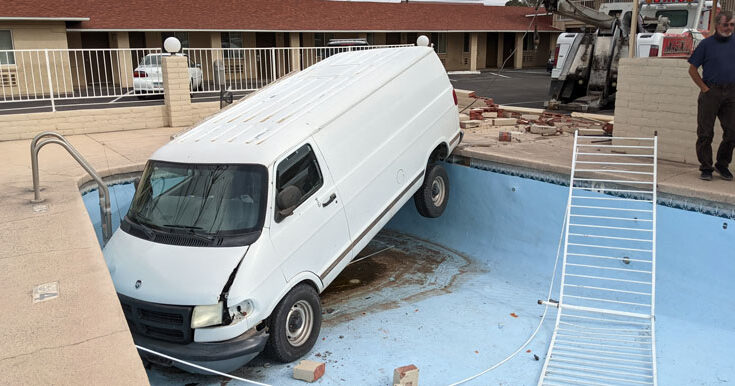 Photo Courtesy Magnum Towing: A 74-year-old Florida man drove his van into the emptied pool at the Economy Inn on Tuesday afternoon.

SAFFORD – An elderly man was not seriously injured Tuesday when he drove his 1998 Dodge van through a retaining wall and fence and into an emptied pool at the Economy Inn.

According to a Safford Police report, an officer was en route to another call for service at about 2:26 p.m. when he was flagged down by a passing motorist who advised about a van crashed into the pool. The officer informed dispatch and responded to the Economy Inn at 225 E. U.S. Highway 70 regarding the incident.

Upon arrival, officers located a van in the hotel’s pool, which was emptied and did not have any water. The driver, a 74-year-old Florida man, was located sitting in a chair in the pool area. He did not show any signs of impairment from alcohol or drugs, according to a press release.

The man allegedly told the responding officer that he was backed into a space at the hotel and when he went to leave he accidentally crashed into the pool when he pressed the gas instead of the brake.

Paramedics from Lifeline Ambulance checked on the driver, but he declined any medical attention and reportedly was going to travel in a personal vehicle to the hospital to be evaluated.

An officer spoke to a woman who advised she is the driver’s daughter. The woman said her father mostly camps at different state parks but stays at the Economy Inn when he wants to do his laundry and then heads back out to live “off the grid.” She said she was in town to bring her father home to Florida because she believes he is suffering from dementia. She had just arrived when her father came out of the room and advised he needed to go transfer the title to the van to someone he was selling it and then the crash occurred.

Magnum Towing utilized its heavy wrecker to remove the van from the pool and then towed it from the scene.

This article was updated Wednesday morning.