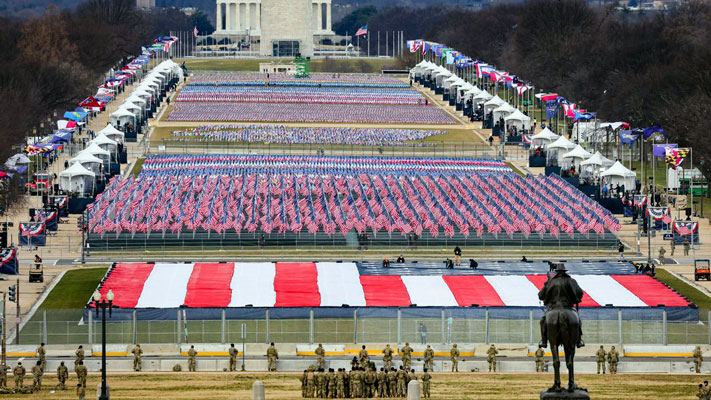 Flags and soldiers replaced the normal revelers at this year’s presidential inauguration due to COVID-19 and security concerns.

What if Washington gave a parade and no one came?  This is just about what happened on Joe Biden’s Presidential Inauguration Day on Jan. 20, 2021.

Other than that, the parade sidewalks were nearly vacant.  Kind of like watching the Rose Parade without the Roses.

This was a celebration to welcome the newly elected President of the United States?  A candidate that overwhelmingly was the favorite choice of the American voter?  An uniter of Democrats and Republicans and a medicinal to liberals and conservatives?

Yet,  the streets were bare of cheering crowds of likeminded supporters?  Am I missing something?

Must have been fear of being labeled a COVID “Superspreader” event that kept the throngs away, since that’s the prevailing excuse to explain and forbid any gathering of more than a few dozen participants.  With COVID lurking behind Washington monuments, under every office desk, seeping through the aged walls of Congressional chambers and lying-in wait on the sidewalks to bite the ankles of unsuspecting parade-goers, the formal parade route more resembled a ghost town than an official presidential function.

All this nonsense in a city that thrives on celebrity recognition.  Doesn’t matter if it’s an obscure Head-of-State, Hollywood superstar, a climate change expert, or billion-dollar social media tycoon, they are all welcomed and applauded as someone special.

Meanwhile, former President Donald Trump exited out the back door;  no parade or marching band for him.  He’s lucky he was still permitted to board Marine One to catch a commuter to Florida.

There’s a new sheriff in town with a whole new mindset, surrounded by a bunch of Ivy League woke comrades who fervently believe America is the most racially divided country since Lincoln freed the slaves more than 150 years ago.

Don’t believe that’s reality, but it keeps the pot boiling.  Especially considering the Antifa riots were going on in Portland and Seattle as Joe repeated the oath of office.

Probably just another coincidence.  Nothing to be worried about.  Besides, if business owners didn’t have enough foresight to buy arson insurance, then it’s their own damn fault for operating a neighborhood bakery in an area zoned for “Riots Only.”

Yessiree, it’s gonna be a wild ride the next few years.  Even more so if Joe eventually realizes he’s supposed to be the president and not a news commentator at CNN.

At least the gals on “The View” will finally appreciate having a guest Commander-in-Chief who is closer to their intellectual level than previous government executives.