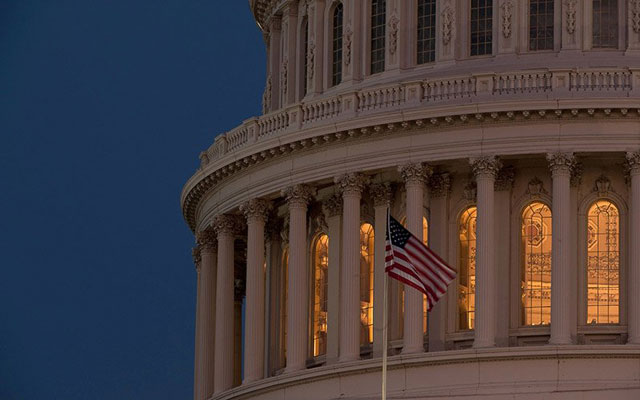 Photo Courtesy Architect of the Capitol:

Just when I thought Senate Republicans were going to show a little backbone, they cowered like a spanked puppy.

Their pitiful theatrics during the recent passage of the 4,100-page, $1.7 trillion Omnibus Spending Bill, which no one bothered to read – in addition to the trillions of dollars they’ve already appropriated – is unmistakable evidence certain mealy-mouthed Repubs can be just as capricious, and self-serving, as big-spending Democrats.

Actually, it’s getting hard to tell the difference.  The bill passed 68 “yes” votes to 29 “no” votes.

Senate Minority blowhard, Mitch McConnell, convinced 17 Republican senators to march in lockstep with their Democratic cohorts and voted for passage of the giant Porky Pig swill that handed President Joe Biden just about everything he wanted, and practically nothing of what we really needed.

Without the 18 Republican votes, the bill would have fallen short of the 60-vote rule required for passage.  Clearly, Mitch and his band of “yes” stooges, solidly guaranteed the success of the legislation.

Obviously, you can thank a Republican for giving Democrats a Christmas to remember.

Here’s a list of the Republican senators voting in favor of this monstrosity:

Coincidentally, the Senate’s massive giveaway scam was happening almost the exact same time the president of Ukraine was personally imploring Congress for billions of more dollars in guns and money to tangle with the Russians.

Passionate in his presentation, he donated VP Kamala Harris and House Speaker Nancy Pelosi a Ukrainian flag, assuring them he wasn’t seeking a handout, but “an investment” of American greenbacks.

In gratitude, Kamala and Nancy returned the favor and gave him an American flag.  Emotions and tears swept through the assembly as the mesmerized crowd nearly clapped their hands raw, repeatedly leaping out of their seats like teenagers at a rock concert.

After all, there had to be some decorum in this pathetic “Made for TV” infomercial.  Trading a 3′ x 5′ yellow and blue piece of cloth for tens of billions of dollars in munitions and related war material is a smoking deal – for Ukraine.

In a single week, Democrats and Republicans guaranteed Christmas 2022 would be the most expensive season of gift-giving in United States history.

All at taxpayers’ expense; all on top of the $31 trillion in debt we’ve already been burdened with, and all with the blessings of over a dozen RINO Republicans.

In fairness to nonRINOs, a person can expect the Lisa Murkowskis, Mitt Romneys, and Susan Collins types to throw in with the Dems.  Not particularly unusual behavior.

However, after talking a good game and promising to walk the walk, several previously gruff chattering Repubs buckled under pressure from their Senate leader.

Maybe, climate change suddenly caused them to reverse their vote and go with the Joe/Mitch duo.

If not, I assume they were amply rewarded for their betrayal.

This raises the question:  Are Republicans willing and able to win?  After their dismal showings in the midterm election and the failure of the prophesied “Big Red Wave” to sweep across the land, there’s growing concern that Repub voters are having doubts over national and state candidates their party selects.

With an open southern border allowing anyone, from anywhere to come in, and government money and services handed out like Halloween candy, it’s looking increasingly doubtful that Republicans can adequately compete with a Democrat juggernaut that has managed to wrest control of an election process by out-smarting the competition.

Equally important, it doesn’t help to have the majority of Republican officials and voters torpedoed by a handful of their own kind.