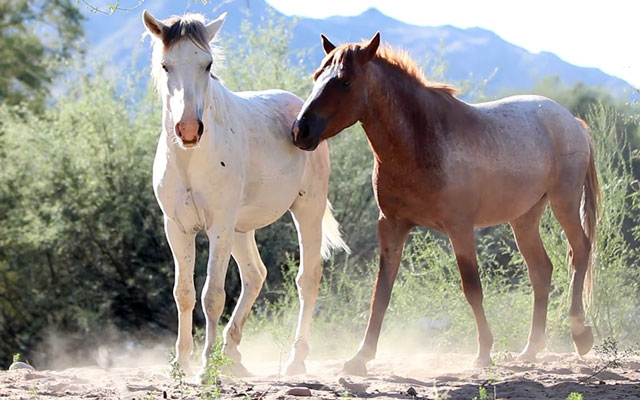 File Photo By Megan Newsham/Cronkite News: Authorities are investigating the slaughter of dozens of horses in the Apache-Sitgreaves National Forests in October. The Forest Service makes a distinction between wild horses, which are protected by law, and feral horses, which are not.

SPRINGERVILLE – At least 30 horses were found shot to death in the Apache-Sitgreaves National Forests in October, highlighting the tensions among scientists, hunters, government agencies, and horse advocates.

The Forest Service is helping investigate the deaths, but this isn’t the first time feral horses have been slaughtered on federal land.

Wild horses are protected by the Wild Horse and Burro Act of 1971. In the Apache-Sitgreaves forests, the horses in the Heber Wild Horse Territory in the Black Mesa District area on the Sitgreaves side are considered wild and are protected by the act. Horses in the Alpine Ranger District on the Apache side are considered feral or unauthorized, so they’re not federally protected. The Apache and Sitgreaves national forests were administratively combined in 1974 and are managed as one from Springerville. The Forest Service uses legal designations laid out by the act to distinguish between wild and feral horses in an area that stretches over 2 million acres.

Rob Lever, a detailed deputy forest supervisor for Apache-Sitgreave, said the classification has to do with location and timing. Horses present during the passage of the Wild Horse and Burro Act are protected, but those that arrived after that or were born out there are considered unauthorized livestock and aren’t protected.

Horses aren’t native to North America. Spanish conquistadors brought them to the continent in the late 1400s, and feral populations grew from escaped animals. Although horses were an integral part of pioneer life, they’re an invasive species that some scientists consider hazardous to the environment.

The Wild Horse and Burro Act established that “wild free-roaming horses and burros are living symbols of the historic and pioneer spirit of the West; that they contribute to the diversity of life forms within the Nation and enrich the lives of the American people; and that these horses and burros are fast disappearing from the American scene. It is the policy of Congress that wild free-roaming horses and burros shall be protected from capture, branding, harassment, or death; and to accomplish this they are to be considered in the area where presently found, as an integral part of the natural system of the public lands.”

Lever said the horses found dead in October are classified as feral and aren’t protected by this act, but may be protected by other laws.

“Wild livestock is somewhat protected by Arizona state statutes, as far as animal cruelty, etc.,” he said. “They’re not protected as far as living in that landscape by the Apache-Sitgreaves forest because they’re not native.”

Some groups want free-roaming horses protected at all costs, while others are more concerned with the well-being of the environment. Passion from both sides has the Forest Service caught in the crossfire.

“We understand this is an emotional issue for a lot of people,” Lever said. “We take it very seriously. There are Forest Service employees, myself included, that own horses. So it’s not something we think is OK as far as the killing of those animals.”

The Forest Service doesn’t have investigatory jurisdiction over unauthorized livestock, but it is assisting the U.S. Department of Agriculture to find out who’s responsible for the most recent slaughter.

To prevent future incidents like this, Lever said the Forest Service is focusing on the removal of feral horses.

“The best thing we can do is round those animals up that don’t belong on that landscape and place them in the best homes we can,” he said.

Removal may not only prevent further shootings, but it’s also a part of the Forest Service’s efforts to restore and prevent the damage feral horses may have caused to the environment.

“We’re managing the habitat here in the National Forest and we have an unauthorized non-native species out there,” Lever said. “It’s adversely impacting the habitat.”

Lever said the Forest Service has been using gentle methods of removal, such as bait-trapping feral horses in big pens. They’re held for five days, then put up for sale in small groups.

Biologist Bob Vahle oversees the northeast part of the state, which includes the Apache-Sitgreaves forest, for the Arizona Wildlife Federation. Vahle worked closely with the Forest Service on horse management and habitat restoration in the area.

“If those animals camp on those spots and they continually are utilized and don’t move off and let things stabilize or restore, then what happens is that all those stream banks start to break down,” Vahle said. “The stream starts to widen, and now the water in the streams essentially gets shallower, the temperatures go up, and now they become less inhabitable by trout or some of the aquatic species that depend on cool water or aquatic insects. So there’s kind of a domino effect that can happen just when you overgraze or over trample a particularly sensitive area like a riparian or stream area.”

Vahle said the feral horse killings might be happening because people see the damage these animals can cause.

“These are animals that are competing with native wildlife,” he said. “They may be competing with a permittee’s livestock … you think everybody loves horses, but I kind of take it in this situation, they’re looking at them as having impacts on habitat, impacts on the wildlife that they may like or impacts on maybe a rancher’s livelihood.”

Although feral horse populations have gotten out of control, Vahle said there are more humane ways to deal with the issue and that the Arizona Wildlife Federation doesn’t condone these killings.

“We do condone the humane treatment of the horses that are there, but we are supporting their removal,” he said. “They’re not native and they have not been formally designated as wild horses under the Wild Horse and Burro Act.”

The Forest Service and other agencies have had many difficulties dealing with the feral horse issue because of some advocates’ emotional attachment to horses, Vahle said.

Horse advocates and organizations like the American Wild Horse Campaign, Salt River Horse Management Group, and Heber Wild Horses disagree that horses damage the environment. The groups are fighting to give free-roaming horses a place on Arizona public lands.

Betty Nixon of Heber has been fighting for the horses in the Apache-Sitgreaves for years. She said feral horses benefit the environment.

Horses “have incisors unlike domestic livestock that’s put in the forest to graze,” Nixon said.

“They actually have upper and lower incisors, so they nip off the grasses, they don’t destroy the root system,” she said. “Also they move and roam as they graze and nip off pieces of grass here and there so the grass is able to regrow without the root system being damaged.

“They don’t they don’t urinate and defecate in the water sources like domestic livestock do. Also, because of the way their digestive system is, the seed that they take in when they defecate throughout the forest, those seeds are in their dung and it seeds the forest. When they walk, they stir up bugs and rodents for birds, coyotes, and other animals that are looking for food sources.

“They also break frozen water like very thick ice on the water sources. They break that so that smaller, weaker animals are able to drink in the wintertime.”

Hunters have also played a big part in the forest damage, Nixon said. Irresponsible target shooting has led to damaged trees and litter from leaving targets and shotgun shells behind that the Forest Service hasn’t cleaned up.

Nixon said that because of the damage caused by humans, the feral horses don’t need to be removed.

The Salt River Horse Management Group also opposes the removal of these horses. It’s working to purchase the feral horses that were removed and put up for sale in the Apache-Sitgreaves, and it urges those in charge of managing the horses to use humane birth control instead of selling them to potentially harmful owners.

Nixon also said the horses never should’ve been classified as feral or unauthorized, but that’s not the Forest Service’s fault.

“It goes back to 1971, the Forest Service never wanted to manage wild horses and so they failed to do an inventory of those horses over in Alpine,” Nixon said. “I believe that there is adequate evidence that there were wild horses in the area. Horses were a huge part of history in Arizona. … I don’t think that they ever should have been classified as unauthorized livestock, but that’s already been OKd and the Forest Service has to abide by the laws.”

Nixon submitted a Freedom of Information Act request to see how the Forest Service had set parameters for the Heber Wild Horse Territory and if it had counted the horses as laid out in the Wild Horse and Burro Act. Nixon said she couldn’t locate any documents relating to the boundaries, size, and territory locations for wild horses in the Apache-Sitgreaves forest, or proof the Forest Service had taken inventory of the horses. Without an accurate tally of feral horses, the service can’t prove overpopulation, she said.

“Should they be removed? Well, they (Forest Service officials) have to prove that overpopulation, and they haven’t done that at this point,” Nixon said. “They’ve never kept an inventory, they’re just now starting to keep an inventory because they have to. They were forced to by a judge.”

In 2005, the Animal Welfare Institute and other animal advocacy groups sued the U.S. Department of Agriculture, the Forest Service, and other government agencies for violating the Wild Horse and Burro Act as it relates to the Apache-Sitgreaves forest. The parties involved settled this case by creating more specific guidelines for the Forest Service to follow in rounding up feral horses and forcing officials to take inventory.

“The Forest Service has a lot of mandates to meet,” Lever said. “There’s always a conflict or can be a conflict between mandates that are given to us by Congress.”

Lever said rounding up feral horses and selling them is the best the Forest Service can do.

“We analyzed our approach to this,” he said. “We analyzed whether these were wild or not. It takes analysis before we do any of that, National Environmental Policy Act analysis. So we’ve done those things and we believe that this is the correct course of action.”

Nixon said all free-roaming horses should be protected under the language of the Wild Horse and Burro Act, adding that the Forest Service is violating the essence of the act.

“The Forest Service failed to follow both the letter and the spirit of the 1971 Wild and Free-Roaming Horses and Burros Act,” Nixon said in a comment to the Heber Wild Horse Territory Management Plan team.

Nixon said the Forest Service has failed the horses and the American people.