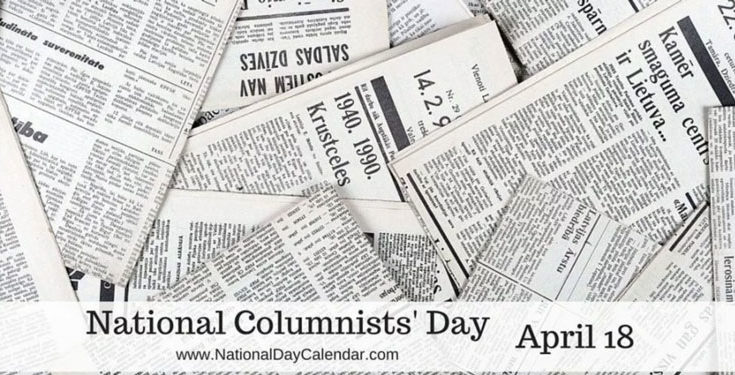 “The anniversary of the April 18, 1945, death of the great Ernie Pyle is a time to reflect on the way newspaper columnists connect, educate, comfort, encourage, celebrate, outrage and occasionally even amuse readers and a time to express appreciation for them for their hard work.” In 1995, on the 50th anniversary of Pyle’s death, The National Society of Newspaper Columnists (NSNC) marked the day for the first time. The society continues to honor the day each year. www.columnists.com.

The 2019 Ernie Pyle Lifetime Achievement Award winner is Kathleen Parker. She is a widely syndicated columnist who previously won the 2010 Pulitzer Prize for commentary.

What makes a columnist? Lisa Smith Molinari (a past president of NSNC) answered this question. “In today’s vast alternative media landscape, there have never been more forms of the art of column writing. Arguably, anyone who writes short-form serial essays, regardless of the medium, is a columnist. Column content varies from opinion to political analysis to sports to critiques to advice to humor to gossip to spiritual to hyper-local news and beyond.”

The National Society of Newspaper Columnists is a 501(c)6 nonprofit organization. The NSNC promotes professionalism and camaraderie among columnists and other writers of the serial essay, including bloggers. NSNC advocates for columnists and free-press issues.

Code of Conduct of NSNC members: “As a newspaper columnist, I will strive to inform, educate and entertain my readers. I will work hard to provoke them to think — whether they agree or disagree with my efforts to depict truth as I see it. I will offer my opinions and the reasons I hold them as clearly and as fairly as I can…I will always remember that my job is a privilege and honor because being a columnist represents the basic American rights of free speech and open discussion.”

“The Art of Opinion Writing: Insider Secrets from Top Op-Ed Columnist” and “The Art of Column Writing” by Suzette Martinez Standring are my favorite books on writing for newspapers. Standring writes a spirituality column for The Patriot Ledger (MA) and is syndicated nationally through GateHouse Media. www.readsuzette.com.

The First Amendment, which protects freedom of the press, was adopted on December 15, 1791, as part of the Bill of Rights. Before the thirteen colonies declared independence from Great Britain, the British government attempted to censor the American media by prohibiting newspapers from publishing unfavorable information and opinions, according to the History website. www.history.com.

World Press Freedom Day was established by the General Assembly of the United Nations in December 1993. And it is annually observed on May 3 to inform the international community that freedom of the press and freedom of expression are fundamental human rights.

The News Media Alliance is a nonprofit organization headquartered in Washington, D.C. The organization was founded in 1992 through a merger of seven associations serving the newspaper industry and was originally known as the Newspaper Association of America (NAA). www.newsmediaalliance.org.

Why do writers write? “Over the years, theory upon theory has put been forth regarding the rationale for writers doing what they do. At its most basic level, some have argued, writing is about someone sharing something with someone else, making connection a key component of the pursuit. The possibility that a book or perhaps just a single sentence or phrase can be deeply moving or at least interesting and informative to a reader is a prime motivation for writers to keep on writing. Through their work, writers have the potential of having a bond with far more people than they can in real life, a perspective that recasts writing from its accepted view as a solitary and lonely exercise,” according to a 2018 article in Psychology Today.

Kudos to columnists and the newspapers that print their columns!

Melissa Martin, PhD, is an author, columnist, educator, and therapist. She lives in Southern Ohio.