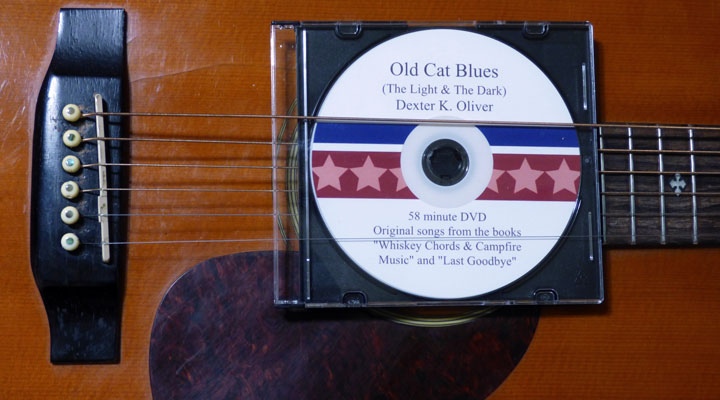 Dexter K. Oliver Photo: This homemade DVD has Dexter K. Oliver playing and singing 19 of his original outlaw Americana songs. It is available at at the Country Chic/Duncan Visitors’ Center, the Duncan Public Library, the Simpson Hotel (Duncan), and the Special Collections Branch of the University of Arizona Library, Tucson, Arizona.

Back in the 1970s Willie Nelson and Waylon Jennings led the charge of what became known as “outlaw music”. They were trying to get away from the stylized Nashville restrictions and control of the sounds they wanted to put out. Studio musicians and overly produced tunes were not only the norm but pretty much all the buying public was exposed to on albums and the airways.

It has been said that country music is three chords and the truth but Nashville had long since moved beyond those Hank Williams simple and direct honky-tonk ways. Waylon, Willie, and the Boys (including Kris Kristofferson, Johnny Cash, and Merle Haggard) wanted to get back closer to the roots of the American music tree. The same was happening in the Deep South with southern rock and in Los Angeles with country rock.

Paying homage to the black blues, gospel, Appalachian bluegrass, jazz, folk, country, rhythm & blues, and rock & roll, artists and groups melded bits and pieces from each of them to produce a hybrid form of music with local flavor. This roots-oriented amalgam became known as “Americana music” and was different from the pure forms of the genres it borrowed from.

The boogie-woogie beat, no matter what tempo, emanated from the sound of moving trains and came of age in American rail yards, barrel houses, and honky-tonks. It was initially played on drums and piano then acoustic guitar. The basic barbaric beat, that incessant, almost out-of-control rhythm, was to be the backdrop to a lot of evolving music forms worldwide. Darien, Connecticut’s Rob Perkin pays tribute to this on his Everglades Rhythm CDs and podcast.

In St. Augustine, Florida Lonesome Bert (Hodge) and the Skinny Lizards write and perform original music in folk/Americana style. The witty, intelligent, or sardonic lyrics come from personal experiences, protests, and people who they met along the way. This is a far cry from the force-fed pop/EDM (electronic dance music) and is one of the major components of Americana songs.

Bisbee, Arizona was the final stop on the road for the tragic Romeo and Juliet-style street performers Derrick and Amy Ross. Under the moniker “Nowhere Man and a Whiskey Girl” they wrote and played their own authentic music as if their lives depended on it. They helped push forward the independent, organic, and unedited melodies and themes that are part of our national fabric and cultural treasure. Locals and tourists alike enjoyed their venues and street busking.

Closer to home, Clifton, Arizona’s Steve Guzzo has long been a contributing proponent of Americana tunes. He was able to turn his background and savvy into vernacular storytelling put to guitar chords and harmonica commemorating a Vietnam Tribute, Back Door Gospel, and Home-Grown Blues (featuring “Working in a Copper Mine”). Those last couple of CDs might seem a contradiction: As Mick Jagger once sang, “I hope we’re not too messianic or a trifle too satanic” (Monkey Man, the Rolling Stones) but there is often a blurred line between the two.

Living in a small town like Duncan, Arizona, it behooves a person to be able to provide their own entertainment. Writing songs was a sideline to my other scribbling for many years. When I put out a book with the words and chords to them I was admonished for not providing the melodies too. Since I don’t have the ability to write musical notation I made a raw 58-minute DVD of me playing 19 of them in the hope that would help.

It is called “Old Cat Blues (The Light & The Dark). The tunes “My Mama, She Lives on Cat Food” or “The Desert Reservation Bar” would come under the light heading while “Life is Just a Card Game (With the Devil Sitting In)” or the death of “Blind Willie McTell” might be considered dark. It can be seen at the Country Chic/Duncan Visitors’ Center, the Duncan Public Library, the Simpson Hotel (Duncan), and the Special Collections Branch of the University of Arizona Library, Tucson, Arizona.

Dexter K. Oliver listens to Americana music with and without the basic barbaric beat. He lives in Duncan, Arizona.