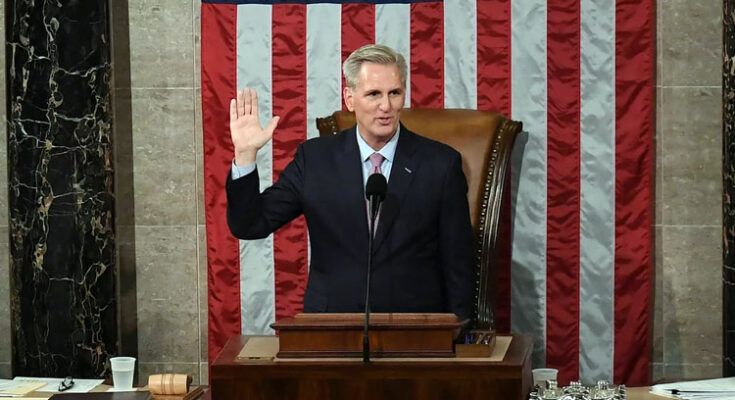 If the recent election of a Republican Speaker of the U.S. House of Representatives – replacing Democrat Nancy Pelosi – sticks to his promises, the nation’s spending habits may soon conflict with the current SMART philosophy.

Unless House RINOs flip and embrace Democrat wallet-busting tactics.  Which, if they follow a few of their Senate Republican buddies, is a distinct possibility.

For the uninformed, SMART is a satirical acronym – “Spend More And Raise Taxes” – poking fun at Democrats’ propensity to continually raise the nation’s debt level in order to appropriate increasing amounts of money to spend on stuff that’s not really needed.

Higher taxes soon follow.  It’s a never-ending cycle.  So far, this madness has propelled us past the $31 trillion mark in indebtedness with no slowing in sight.

Our kids’ grandkids will be paying the bill.  Interest on this colossal loan is presently one of the largest expenditures in the annual budget – accelerating yearly.

A whimsical experiment reported by Math Central, an online service, illustrated how long it would take a person to count one trillion dollars at a dollar a second:  “There are 31,536,000 seconds in a 365-day year, and one trillion divided by 31,536,000 is approximately 31,710.  So, it looks like that’s where the estimate of over 31,000 years to count to one trillion came from.  It’s based on an assumption that a person is counting one number/dollar each second.”

Simply, to count to a trillion – in one-second sequences – requires almost 32,000 years.

Now, multiply those numbers by 31 and you begin to get some idea of the gargantuan size of our national debt.

It’s beyond mind-boggling.  Actually, not even comprehensible.  After a while, the whole scenario becomes meaningless arithmetic.  Particularly, since the Treasury Department frequently prints money as fast as the presses can run.

Who can keep up with the running tally?

Absolute lunacy.  At the present rate of borrowing and spending, Congress may soon have to use astronomical terms when describing the nation’s financial situation.  An annual budget could be thought of as being “Light Years” from sound fiscal policy.

We have, for all intents and purposes, been cleverly bargained into debtor’s prison by the very folks we’ve elected to represent and protect us.  Most people could work a hundred lifetimes and never come close to paying off this behemoth of a bill.  Additional borrowing, interest, and inflation continually add to the amount – even as we’re paying to reduce it.

The national debt ruse, growing under Democrat and Republican administrations, and the collection of income taxes as payment on it, makes any Ponzi scheme seem like a child’s kindergarten prank.

Samuel Bankman Fried’s recent multi-billion fraud scams pale in comparison to the unfathomable $31 trillion-plus debt we are being held hostage to by plutocrats, banking cartels, and their minions in Congress.

If newly elected House Speaker, Kevin McCarthy, can slow or reverse this trend – and continue to resist proposals to slip back into the old ways of doing “business” – then there’s hope the Republic will continue to breathe without the help of life-support – aka more borrowing and spending.

This a reminder that when you’ve dug yourself into a financial hole, stop digging, because things are not going to get any better until you do.

The fact nearly four days and 15 separate House votes for McCarthy were necessary to finally win his party’s approval, was unmistakable evidence the need for change was smoldering within.

212 Democrats, on the other hand, voted in absolute solidarity for their candidate – every time.  No other nominee was supported.  Not one.

How is this possible?  Have Dems been intimidated by Nancy Pelosi to such a degree they are afraid to express different points of view?  Surely, there must be at least one, or two, House Democrat members capable of thinking on their own, forming individual conclusions, and refusing to obediently tote the party line.

Eventually, after 15 tries, McCarthy received the required 218 votes to secure the job.

That’s how the process is supposed to work until an agreement is reached.  Everyone’s ideas, sentiments, and evidence need to be heard.  Otherwise, what’s the point of having a representative government if only one side of an argument is allowed to be presented?

The Jan. 6 Commission on “insurrection” at the national capitol in 2021 was prima-facie evidence of the biased approach to factually researching, presenting, and rendering the truth.

As was the FBI’s armed incursion in securing documents from a former president’s residence when there was no substantial evidence to authorize the raid.

Now, seems President Joe is suspected of possessing classified government documents since his VP days.  Will the FBI suddenly bust into his home or office, searching for incriminating data?

This is why discussion of opinions and accusations, verified by facts, is paramount in presenting legitimacy in any discrepancy.

Including, deciding who will be the next Speaker of the House of Representatives.

Interestingly, there is no constitutional requirement for a House Speaker to be chosen from any of the Congressional representatives.  Imagine how long it would take for both sides to agree upon a nonmember seeking the speakership.

In spite of media blabber and half-truths, McCarthy’s 15th final vote was not a new record in choosing a leader.  In 1856, the 34th Congress took two months and 133 vote attempts to reach a decision.   In 1923, nine rounds of votes were required.

Democracy can occasionally be a clumsy and messy business, intentionally conceived and designed that way.  With a “checks and balances” system of government, each branch of government is intended to be a check upon the other, guaranteeing no single branch can overpower the others.

Otherwise, as is often the case in the world, governments become monolithic and dictatorial.  A citizen’s rights can be ground into the dirt or they’re thrown into jails and prisons with little hope of being treated lawfully and fairly.

The United States is fortunate to have been established upon a citizen’s “Bill of Rights”;  enhanced by a free speech clause and enforced by an individual’s right to own firearms, among other provisions.

Are there flaws?  Of course, but there are procedures available to resolve those issues without resorting to physical violence.  At least until the government ignores, or is no longer responsive to the people’s grievances.

While selecting a Speaker of the House may seem trivial, annoying, confusing, and time-consuming, consider the alternatives.

Some of them are not very pleasant.