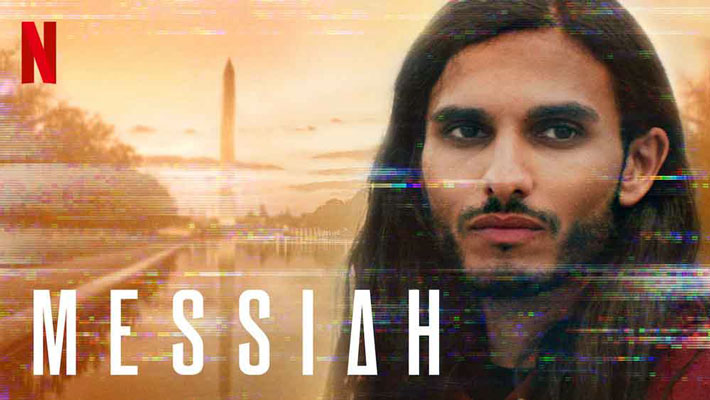 Will he “convert you or con you?” the 10 episode series trailer for Messiah asks, but does not answer. The Netflix series Messiah produced by Mark Burnett and Roma Downey is sparking discussion and debate. Like most films about faith, Messiah raises thought-provoking questions.

The war outside of America rages on with killing for the sake of land, resources, and theology. Who owns the bigger guns? The messianic man leads a group of Palestinian Syrians to the border of Israel. But along the way, he demands their guns to be buried. No weapons, no food, no water. The asylum seekers stand behind the barbed wire fence.

The powerful and the powerless surviving on one planet. God’s planet. And a divine and devout figure has returned to rule and reign. But is it a hoax? Is he a fraud? Does he promote the plow or the sword? Is he a saint or a socialist soldier?

A C.I.A. agent is determined to get to the bottom of a worldwide phenomenon surrounding a religious man referred to by some as Al-Masih who claims to be sent by God. An F.B.I .agent joins in. An Israeli agent travels to America to chase and arrest the rogue prisoner.

Messiah depicts reactions toward an ambiguous Christ-like man claiming to be sent by God. He builds a worldwide following of people from different religious backgrounds, including Jews, Christians, and Muslims. He is portrayed as a calm man with eyes that peer into the crevice of each soul, but he offers compassion instead of condemnation.

Many of his miracles mimic Christ, such as walking on water and raising the dead, but this second coming is not what Scripture says:

As Jesus was sitting on the Mount of Olives, the disciples came to him privately. “Tell us,” they said, “when will this happen, and what will be the sign of your coming and of the end of the age?” Jesus answered: “Watch out that no one deceives you. For many will come in my name, claiming, ‘I am the Messiah,’ and will deceive many. You will hear of wars and rumors of wars but see to it that you are not alarmed. Such things must happen, but the end is still to come. Nation will rise against nation, and kingdom against kingdom. There will be famines and earthquakes in various places. All these are the beginning of birth pains.” (Matthew 24:3–8)

The Bible is clear that Christ’s return will be witnessed by all people on the planet: For as lightning that comes from the east is visible even in the west, so will be the coming of the Son of Man. (Matthew 24:27)

Viewers of the series encounter a modern-day miracle-working mystery man. Is he of divine origin or he is a master manipulator? Is he a blasphemer, false prophet, or madman? Is he the Christian version of the Antichrist or the Jew’s long-awaited Messiah or the Muslim’s prophet? Charlatan or Chosen One? The series raises “What if?” questions and ends with Al-Masih’s true identity left unanswered.

Messiah is rated TV-MA for frequent strong language, nudity, some sexual content, and graphic violence. The series reveals the worst and the best of humanity. We view the aftermath of a suicide bombing; the destruction from a tornado; and human suffering. But we also see humanitarian efforts to help others in crisis.

But what do Americans believe about Jesus? Who do they say he is? “Millennials are the only generation among whom fewer than half believe Jesus was God (48 percent). About one-third of young adults (35 percent) say instead that Jesus was merely a religious or spiritual leader, while 17 percent aren’t sure what he was. In each older generation, the belief in Jesus as divine is more common — 55 percent of Gen-Xers, 58 percent of Boomers and nearly two-thirds of Elders (62 percent) believe Jesus was God,” according to a national study by the Barna Group. Millennials are the generation born between 1984 and 2002; Gen-Xers, between 1965 and 1983; Boomers, between 1946 and 1964; and Elders, in 1945 or before. www.barna.com.

Is Al-Masih, the central Messiah figure in the Netflix series, Jesus Christ returned or is he an elaborate hoax? Or is he the Antichrist? It is up for the viewer to decide.