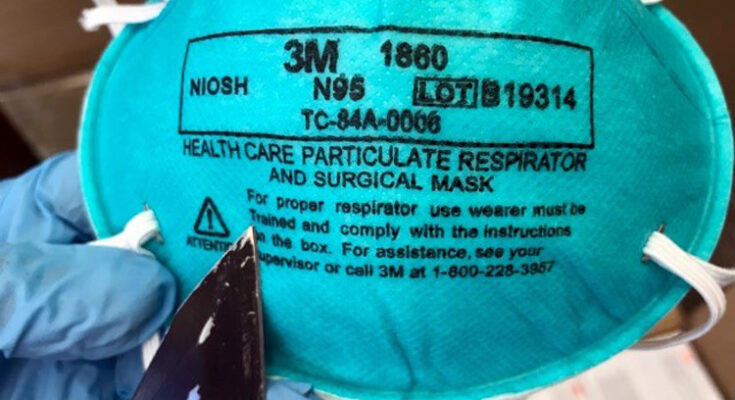 Contributed Photo/Courtesy ICE: This counterfeit 3M N95 mask was seized in a raid.

You knew it was just a matter of time before someone suggested if one face mask is good, then two must be better. And three would be better yet.

Dr. Anthony Fauci, Director, National Institute of Allergy and Infectious Diseases since 1984 and the nation’s foremost authority on all things COVID, is now recommending wearing two masks. More, if we’d like.

Applying this logic, why not 4, 9, or 15 masks at a time? How about duct taping a NAPA Auto-Extreme Guard air filter to our face? That, plus a scuba tank full of purified air would probably guarantee we’d never inhale one of those pesky COVID germs again.

People may recall Fauci is the government’s primary health expert who originally commented during the early stages of the pandemic last year that the wearing of face coverings was not really necessary, since the virus was so tiny it could easily pass through an ordinary paper or cloth mask.

Then, as he often does, he changed his mind and began insisting the wearing of masks would be beneficial in slowing the spread of the disease.

Later, he had the idea people could add gloves, face shields, and goggles to their list of anti-COVID accessories. Even better, how about shrink-wrapping ourselves with multiple layers of clear plastic film? Maybe a custom made hazmat suit would be more appropriate?

Speaking on “NBC News’ TODAY,” on Jan. 25, Fauci remarked, “So, if you have a physical covering with one layer, you put another layer on, it just makes common sense that it likely would be more effective. That’s the reason why you see people either double masking or doing a version of an N95.”

“Likely” be more effective? Similar to a car salesman saying, “Common sense suggests this used car is likely to get 67 miles per gallon.” Unless it doesn’t.

According to “Forbes,” for all this expert knowledge and advice, the taxpayers are only paying him $417,608 per year – the highest-paid employee in the federal government. During the Obama era, Fauci received a substantial salary boost of $82,608 annually. From 2010-2019, Fauci gathered $3.6 million in compensation, averaging $360,000 per year. Which works out to about $1,000 a day – including weekends and holidays.

Not bad for government work.

At the same time, he’s been regularly collecting these big payouts, the Centers for Disease Control reports coronavirus has infected more than 25 million Americans, with about 428,000 deaths. Seems the more people mask up, social distance, test, and remain secluded in their homes, the faster the virus scatters.

Admittedly, these statistics are subject to interpretation: Is COVID-19 a variant of an ordinary flu strain or an intentionally concocted pathogen? Are hospitals and doctors’ offices correctly recording a COVID death as the primary cause of death or comorbidity? Meaning, preexisting serious health issues are often included in the COVID death tally.

A Sept. 1, 2020 report by “WebMD” indicated “About 94% of people who have died from COVID-19 in the U.S. also had other contributing conditions listed on their death certificates, according to new data released by the CDC. On average, patients’ records had 2.6 additional conditions. Only 6% of deaths listed COVID-19 as the only cause.”

Unfortunately, with Fauci’s inspired mandatory lockdowns, stay-at-home orders, and business wrecking decrees, the economy has been tossed into a tailspin. Coupled with President Biden’s newly enacted executive orders relaxing illegal immigrants’ entry, the moves will further enhance the COVID situation and have a greater impact upon the public.

I won’t even get into all the hoopla the virus vaccine is generating. After patiently waiting for its development, arrival, and distribution, we’re still being reminded we will need to mask-up, social distance, and wash our hands every chance we get.

It’s beginning to look like COVID is never going away. It may remain – in one fashion or another – the primary excuse for the government to maintain a perpetual regulatory presence under the guise of protecting us from an ever-present unseen menace.

At least Dr. Fauci, an 80-year-old, 53-year employee of the National Institute of Health, isn’t overly concerned with his employment security or retirement. His job won’t be in jeopardy of being eliminated by business downsizing. He’ll do just fine. He may even get another promotion and pay raise from the new administration.

Besides, like everyone else in government, he can always blame his mistakes on former President Donald Trump. Actually, it would be unusual if he didn’t.