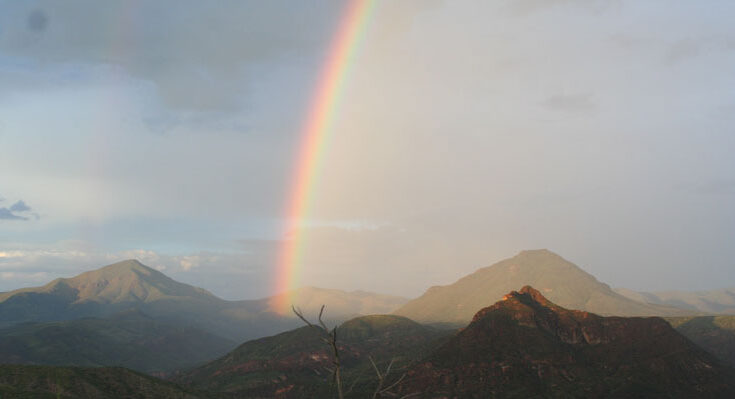 Walt Mares Photo/Gila Herald: The Clifton/Morenci area was graced with a large rainbow on Sept. 5.

A rainbow was quite the highlight

It has long been a practice of mine. I find fascination in the sky. By that I mean clouds. They are fascinating.  I often find their sizes and shapes incredible.

I ask myself, ‘How can anybody believe God does not exist?” (Refer to the deity as a Higher Power if you prefer to.)

With the rain we have had during the past month there has been the opportunity to simply stare and wonder about the beauty of clouds.

Sunsets are often spectacular with their deep colors of red, orange, black, and blue. Wow! Who needs television to see the colorful wonders of nature?

On the other hand, it would not be surprising if many did not see or appreciate it. After all, it is not unusual to see many people, particularly among the young, with their attention riveted to their cell phones. They talk or text as they walk and are seem totally aware of whatever is around them.

They are unaware of the beauty that surrounds them such as that magnificent rainbow.

I sometimes see birds involved in some type of activity that catches my attention. I either stand or sit somewhere and watch what they are doing.

Some folks may just be too busy to watch clouds or birds or look at a rainbow. Their attention is rightfully focused on what they are doing. They may be thinking about something involving their families, work, debts, or are paying attention to their driving.

Watching clouds does not make me a better person than other folks. Not at all. I am simply grateful to be retired and have the time to observe things. I am aware that I live in a beautiful country and have a tremendous amount of personal freedom. I can enjoy myself without having to spend so much as a dime.

For me, the value of seeing that rainbow is priceless.

To me, clouds or even a cloudless beautiful deep blue sky are indeed a big part of what much of my freedom is all about. I also find it a good way to avoid the demons of anger and fear that so many fellow Americans seem occupied by these days.