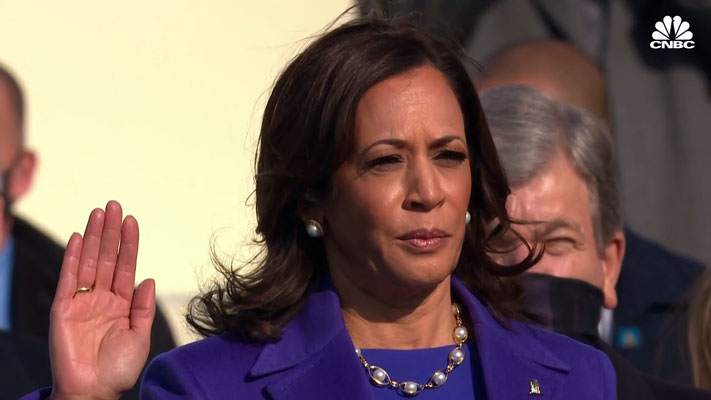 President Joe Biden has figured out a plan to deal with the surging migrant problem along our southern border — dispatch Vice President Kamala Harris to examine the seriousness of the administration’s self-inflicted wound.

Not exactly sure why Joe thinks Kamala is the person to handle the job.  I don’t believe she’s had much experience in dealing with border issues, other than what she’s seen on CNN or read in the Washington Post.

Folks may remember Harris was an early drop-out of the 2020 Democrat Presidential Primary due to a lack of voter and financial support.  She simply failed to generate adequate enthusiasm in a field of left-leaning candidates, even though she shared similar political sentiments.

She also spoke in unflattering terms about Joe, but later admitted her schtick was just campaign blather, more scripted than serious.

As it turned out, she’s every bit as liberal as the other contenders.  Guess Joe was sufficiently impressed to make her his running mate, regardless of her ho-hum qualifications and public support.  Or, maybe he had a premonition the election was going to go his way and Kamala would help bring along the uber left vote.

Whatever the situation, she’s now leading a delegation to study the effects of a near-total breakdown of border security.  With thousands of Central Americans wading across the Rio Grande River and scampering through desert terrains into Arizona and New Mexico, the stability of our border has been sufficiently breached to become a national concern.

With Border Patrol and Customs officials stressed to the limits, including detention facilities filled to overcapacity, many of the migrants are simply being transported and dropped off in various communities north of the Mexican boundary.  There appears to be little concern if these individuals are carrying diseases or other health issues.

Recently, several van loads of migrants were unloaded in the small rural community of Gila Bend, Arizona.  Mayor Chris Riggs was compelled to declare a state of emergency, citing a lack of funds and support organizations to adequately tend to the needs of the immigrants.

President Biden’s much-awaited press conference (March 25, 2021), the first one of his new administration, failed to offer substantiative solutions to the crisis, insisting he and his “team” would attempt to negotiate with various Central American governments to contain the calamity.

Team Leader, Kamala, previously remarked “There’s no question this is a challenging situation,” and “needless to say the work will not be easy.”

Both Joe and Kamala failed to mention there were already safeguards in place until he decided to publicly announce Trump’s border policies were too harsh and restrictive and proceeded to dismantle them.  Including halting border wall construction,

We are now seeing the results of this incredible blunder.  Additionally, I sincerely doubt Kamala has the knowledge and experience to tackle the problem.   If I recall, last year she compared ICE (Immigration and Customs Enforcement) to the KKK.

Not an overly intelligent way to begin a meaningful relationship.  Especially if it involves dealing with agencies whose primary responsibility is to monitor and enforce border and immigration policy.

Instead of building upon or slightly tinkering with existing border and immigration management, the Biden Administration has decided to nearly dismantle the entire system — leaving chaos and uncertainty in their wake.

In cowboy terms, it’s beginning to appear Joe and Kamala may have stepped waist-deep into a giant pile of fresh political poop.  This probably could have been avoided if it wasn’t for their twisted hatred of Donald Trump and anything he accomplished during his presidential term.