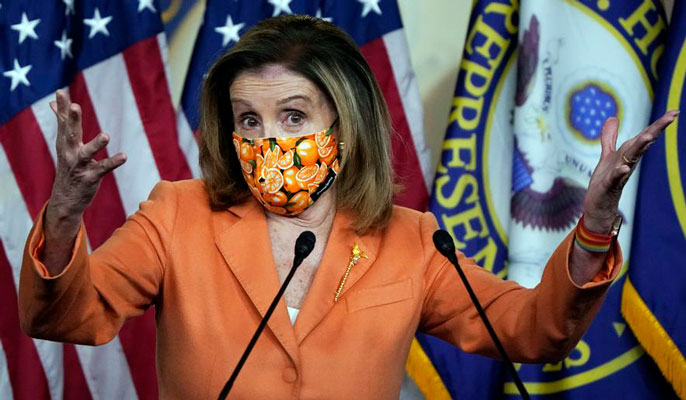 One thing about Speaker of the House of Representatives, Nancy Pelosi (D-CA),  doesn’t give a tinker’s twit who sees her without a mask, even though she constantly admonishes everyone else to wear one.

She’s been exposed several times in different situations, maskless, but since she’s a big-shot in Congress, the rules apply differently.

Recently, she mandated anyone visiting or doing business in the House side of Congress could be subject to arrest if they didn’t wear a mask.  This included members of the Senate – just down the hall.

Nancy is third-in-line in presidential succession.  If Joe and Kamala are unable to continue in their jobs, the Oval Office is her’s if she wants it.

Think about that the next time you see Joe sauntering from the podium, or Kamala laughing hysterically when a reporter asks her a question.  It actually could get worse.

Recently, in another blatant display of “masks for thee, but not for me”, Nancy was videoed delivering a maskless speech to a large gathering of wealthy Democrat Party donors.

The event was sponsored by the Democratic Congressional Campaign Committee and attended by about a hundred mask-free guests.  Reportedly, tickets to the function cost between $100 to $29,000.  Which, I suppose, represents all economic levels of the party.  The rich paid more for the same chicken, green peas, and dry dinner roll, while the less affluent enjoyed the Cabernet Sauvignon from Napa Valley’s finest vineyards.

However, there were a few mask-wearing folks at the gala – the servants.  Apparently, they were required to strap on face coverings.  To their good fortune, it was probably lucky they were protected from breathing the same contaminated air as the egotistical guests.

Readers may be sensing a pattern here – those who make the rules often do not abide by the rules.  There have been numerous accounts and video evidence of high-ranking government officials flaunting their disregard for certain COVID-inspired regulations, while at the same time reprimanding the public to get vaccinated, wear a mask, and social distance.

Better yet, just stay home – like before the vaccines became available.

Now, we’re being advised the COVID vaccines may not be very effective after six months and an additional booster shot will be necessary beginning in September.  Followed by a 4th, 5th, or 6th injection?  This scam could go on forever, particularly if Big Pharma has anything to say about it.

However, Nancy and her elite friends don’t really worry too much about COVID or anything else affecting the majority of our citizens.  They live in their own bubble, mostly immune to the trials and tribulations the rest of us routinely face.

Wealth, fame, and positions of authority separate them from the ordinary.  They have no conception or compassion for anyone or anything not benefiting their own narcissistic ambitions.  In Nancy’s case, as Speaker of the House of Representatives, she attempted to impeach the same sitting president — twice.

Just because she could.  Personal opinions, not facts, were the motivating factor.

However, impeachment failures didn’t deter her from constantly berating (former) President Trump.  The phony “Capital insurrection melee” on Jan. 6, 2021, was another venture into portraying Trump as some kind of unhinged tyrant, intent upon maintaining the presidency by any means possible.

Unbelievably, the only person shot and killed by a police officer during the “insurrection” was an unarmed Air Force woman veteran.  No charges were brought against the officer.

I sincerely believe these people view themselves as God-like, with infinite knowledge, wisdom, and universal influence.  Endowed with an abundance of supposed superiority, they’ve elevated their importance above the laws of common mortals. When a few are arrested and convicted of a crime, connections to the legal system often result in reduced sentences, and occasionally, political pardons.

Exceedingly haughty in pride, they don’t seem to care if they’re embarrassed, ridiculed, or justly criticized for their hypocritical behavior, simply perceiving the accusations as stemming from ignorant “little people” acting foolishly.  Or, as Hillary Clinton termed it “a basket of deplorables.”

One of the big problems of being a member of the ruling elite is that history sometimes has a tendency of repeating itself.  While the uppity-ups may be on top of the world one day, sunrise tomorrow may prove to be a different day.

It’s happened several times before, and there’s no reason to believe it won’t happen again.

The views expressed in this editorial are those of the author.