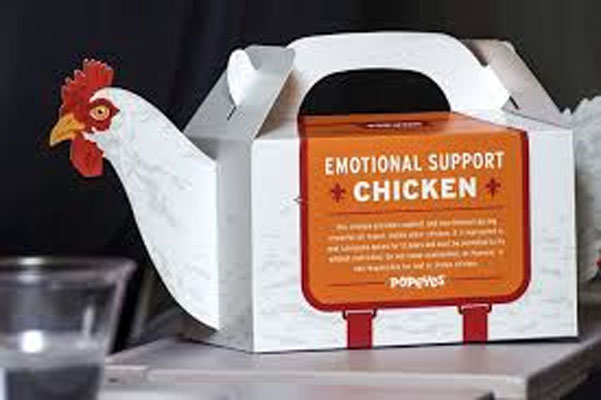 A “comfort animal, often called an “emotional support animal,” is a “therapy animal, usually a dog, that is specially trained to provide comforting companionship and an emotional release for victims of a crisis or disaster.”  Comfort animal is a term sometimes used for what are commonly known as crisis response animals. — www.dictionary

Yes, I have a pet dog.  I love my dog.  I don’t mistreat my dog.  I don’t keep him chained to a steel stake in the backyard.  I keep his vaccinations current.  Sometimes he gets upset with me, particularly when I forget to toss him a treat, but we both soon forgive and forget.

I have never taken him to lunch or dinner at any of the local restaurants, and I don’t recall a waitress ever asking me how Benson was doing and was he remaining healthy through the COVID turmoil?

He hasn’t flown commercial, so I’m not sure how well he’d interact with the rest of the airborne menagerie.

However, restaurant greeters occasionally ask my wife how she handles the stress of being married to a near idiot, but that is usually a courtesy inquiry in an effort to remain polite.  I’m not sure they really meant it, or if they actually knew my IQ number.  Which, I think, is somewhere in the high single digits.

Not too shabby for an old Safford High grad.  Unfortunately, I didn’t receive an academic scholarship to Stanford University – something about not meeting certain scholastic standards.  Whatever that means.

There’s wisdom in the adage, “When one door closes, another opens,” and I was accepted into the University of South Vietnam.  Thanks to the assistance of the Marine Corp’s office of Higher Institutional Placement (HIP) – a voluntary alternative to the mandatory draft.

All I had to do was 20 pushups every six or seven minutes, run up and down hills until the sun disappeared, learn to shoot a weapon at someone I had never known, and convince the Drill Instructor I was sincerely having a good time.

Seemed easy enough.  Besides, Standford was for wussies.  Real men didn’t mind facing an AK-47 assault rifle to make America safe for future Stanford Members of Congress.  Actually, it was expected.  Someone had to do the dirty work.

I didn’t know that then – I do now.  Or, as Creedence Clearwater Revival reminded me, I was no “Fortunate Son.”  General Electric’s quarterly dividend checks could be in jeopardy, so to spare stockholders the disappointment of a shrinking return on investment, hundreds of thousands of naive high school kids answered the call.

Some went to Canada, while others stopped off in Woodstock, New York for a celebration of music, peace, and love.  And, maybe a little cannabis to enhance the mood.

Washington politicians, most of whom had no skin in the game, lied to the American people that we were continually on the cusp of victory in Vietnam.   A decade and 52,000 funerals later proved otherwise.

Almost an exact replay of our 20-year incursion into Afghanistan.  Mealy-mouthed political hucksters and woke military generals faithfully assured us the Taliban was on the run, even as they were quickly advancing toward the last functioning airport in the country.  In the end, Kabul’s runways were jammed with fleeing citizens and U.S. employees, desperate to hitch a ride to anywhere.

The American Army had already gone home at the urging of their Commander-in-Chief – a brilliant tactician and scholar of failed military encounters.

I don’t believe even a semi-intelligent Stanford poli-sci student would be that scatterbrained.

As I was saying, before flashing back to the good old days, the wife and I were having lunch the other day at one of the Mexican food establishments when a lady walked in with her “comfort” dog.  Both she and the pet sat on the same side of the booth dinette.  Maybe the dog was the only luncheon date she could get, I don’t know.

To my knowledge, the waitress didn’t request if the animal was friendly, flea and tick-free, and up-to-date on his vaccines?  Or, if the pooch had washed his paws prior to entering, or where his nose had been a few minutes earlier?

Basic stuff a waiter might want to know before serving a helping of chips and salsa.

To my way of thinking, almost sounds like animal abuse to expose a dog, cat, hamster, miniature goat, peacock, or python to a human’s mentally agitated outbursts.

After all, who or what is going to comfort the comfort animal?

But, that’s the world we live in, which I’m desperately trying to adjust to.  Some days are better than others – depending upon if the mother-in-law is planning to stay a while longer or if she’s really leaving before noon.

Now, I understand several communities around the country are requiring proof of a COVID vaccination to be presented before an intended customer is allowed to enter a restaurant.  No documented shot record – no hamburger and fries.  Simple as that.

If the customer is accompanied by a comfort pet, then I guess the animal is okay to go on in, but its unvaxxed owner will have to remain outside.

Interestingly, there’s no mention of the necessity to ask if a customer has had a yearly flu shot, valley fever, various STDs, tuberculosis, bed bugs, or any other communicable disease.  Just COVID.

This presents a unique situation; there are presently three classifications of customers who are permitted to dine in certain restaurants – those who have received the COVID vaccines, emotional support animals, and recently arrived undocumented migrants from Guatemala and Somalia.

In a time when climate experts are telling us the Polar ice caps are melting, millionaires and billionaires’ beach homes are endangered by rising tides and the Taliban has overtaken Afghanistan because of global warming, don’t these people realize the climate menace is the single greatest threat to our continued existence?  Far exceeding the dangers of the China virus.

They inform us we only have about nine years before the whole planet evaporates.  Not sure if that includes everyone outside the United States.  Guess I’d better cancel any plans I may have had for my 60th high school class reunion.  Too bad, I was really looking forward to seeing if Beverly “BB” Hymen was still as overweight as ever.

She was affectionally known as “BB”, a term of endearment for “Big Bev.”  Others mockingly called her “Big Buttocks,” in a Forrest Gump sort of way.  BB was state runner-up in the high school steer wrestling finals but was suddenly disqualified because of testing positive for bovine enhancing steroids.

In an effort to get her waistline under 74 inches I’d heard she’d been pumping iron at Jim’s Gym.  Unfortunately, since COVID mandates have closed most of those facilities she’s remained home, on the couch, gorging multiple handfuls of Marie Osmond’s “18 Pounds Gone” diet supplements.

Speaking of those crazy Taliban folks – most of them have probably never heard of the perils of climate change, don’t own a beach cottage, or drive a Tesla, or have gaudy solar panels nailed to the roofs of their huts.  I doubt if one in a million is aware of the dangers of not being COVID vaccinated.  They simply cut off the heads of anyone suspected of being infected with coronavirus – or being a New Orleans Saints fan.

Also, I imagine they’ve already eaten their comfort animals.  Looks like having a calm and relaxed mental disposition isn’t a big deal to them.

Most likely, it never occurred to the Taliban ransacking Kabul without wearing masks wasn’t socially acceptable behavior.  Boy, are they in big trouble with Dr. Fauci and the Centers for Disease Control.  A “super-spreader event” in full view of cable news.

I just noticed it’s almost 5:30 p.m., time for another Delta virus statistical update from Washington.  The Taliban probably thinks it’s simply a fishing report for the lowlands around the mouth of the Helmand River.

If COVID doesn’t ultimately get us, climate change surely will – or maybe a global pandemic of stupidity gone viral!

The views in this editorial are those of the author