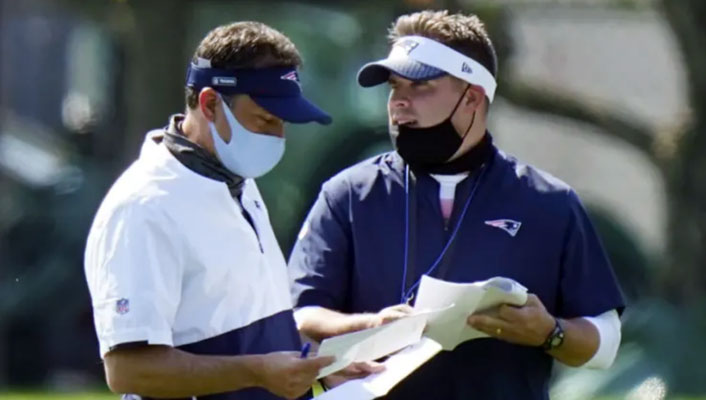 Jedd Fisch, who served as the New England Patriots’ quarterbacks coach in 2020, will have his first game as UA head coach against BYU on Saturday.

The Arizona Wildcats are coming off their third straight losing season. They went 0-5 in the 2020 campaign (shortened due to the COVID-19 pandemic), which placed them dead last in the South division of the Pac-12 Conference.

The forgettable season prompted the Wildcats to fire head coach Kevin Sumlin, who went 9-20 in his three years on the job.

Jedd Fisch, who served as the New England Patriots’ quarterbacks coach in 2020, was hired as the new head coach of Arizona. Fisch only has two games of NCAA head coaching experience, when he went 1-1 with UCLA in 2017 following the firing of Jim L. Mora.

Fisch obviously has his work cut out for him as he tries to help Arizona achieve its first winning season since 2017 when they went 7-6 under Rich Rodriguez.

Last week, Fisch revealed that the plan is for both Gunner Cruz and Will Plummer to see playing time behind center in Saturday’s opener against the BYU Cougars, per Justin Spears of the Arizona Daily Star.

“Two’s better than one,” Fisch said at the time. “That’s our mindset until further notice.”

On Tuesday, however, Fisch admitted that he could always move away from Plan A should Cruz (the starter) get off to a blistering start.

“Yes, 100%,”’ Fisch said, per Michael Lev of the Arizona Daily Star. “I’m not bound to put another person in if we have two touchdown drives in a row. Call it a champagne problem.”

Earlier this year, Cruz transferred to Arizona from Washington State. In one game appearance for the Cougars (a 38-13 blowout loss to the USC Trojans), Cruz completed five of seven pass attempts for 34 yards and a touchdown.

Plummer appeared in three games last season as a freshman. He completed 43 passes for 383 total yards, no touchdowns, and three interceptions.

“We plan on playing them both,” Fisch said on Monday, per Lev. “How much, we’re not sure yet…But there’s certainly an opportunity for a little platoon system. Right now, they’ve embraced it. They’re working hard and getting better.”

Mathematically speaking, Arizona only needs one win to improve off last year’s winning percentage. ESPN’s Football Power Index (FPI) projects the Wildcats to do just that.

The FPI projections have Arizona finishing with a 3-9 record on the season. The projections give them a 92.0 percent chance of beating the Northern Arizona Lumberjacks on Sept. 18).

For what it’s worth, they are a giant underdog against BYU. FPI gives Fisch and company just a 19.1 percent chance of winning that game.

The Wildcats are a -12.5 underdog for Saturday’s opener against BYU. Arizona sports fans who want to see the full betting lines and information can view more at Arizona Twinspires.

This game will be held at Allegiant Stadium in Las Vegas, Nevada. The Cougars are predictably the heavy favorites against Fisch’s team.

These two teams haven’t met in three years. The last meeting took place on Sept. 1, 2018, where the Cougars escaped Tucson with a 28-23 victory.

With a questionable quarterback situation and a new head coach needing time to adapt to his new team and system, it’s hard to envision a Wildcats victory here. BYU should have this game locked up early in the fourth quarter.

ESPN’s PFI gives Arizona a 39.7 percent chance of winning this game. They may be the underdogs, but an upset for Fisch’s squad is a lot more likely here compared to the season opener against BYU.

This will actually mark the first meeting between Arizona and the Aztecs since Aug. 30, 2001 (a 23-10 Arizona victory). Not that this has anything to do with the Sept. 11 matchup, but a fun fact: San Diego’s last win against Arizona State came on Nov. 10, 1979.

The Aztecs, who went 4-4 last season under Brady Hoke, have the advantage in practically every key area. Starting QB Jordan Brookshire should have his way with an Arizona defense that will need some time to come together.