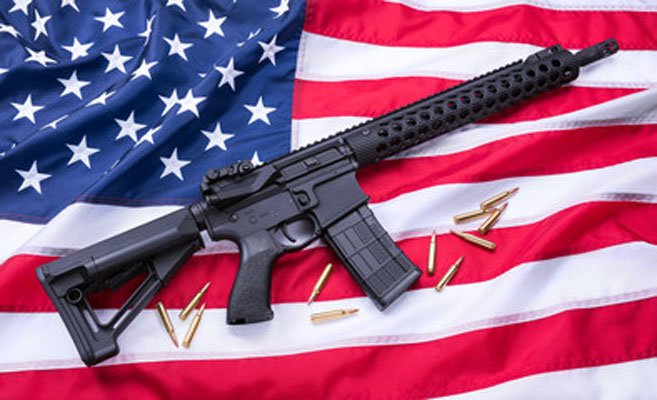 The latest mass shooting at the Robb Elementary School in Uvalde, Texas has once again elicited the “thoughts and prayers” from Congressional leaders in Washington, D.C. They are probably getting sick and tired of having to take time out of their busy schedules consolidating their power and financial gains to issue such boilerplate platitudes. After all, this was the 213th mass shooting in the first 144 days of 2022 in the USA (source: Gun Violence Archive).

The lobbyist loot that finds its way into their pockets via “campaign contributions” from firearms manufacturers and the National Rifle Association (NRA) compels them to avoid even attempting to pass legislation that might help alleviate this home-grown problem. They know which side their bread is buttered on and if it seems they value gun “rights” over human life, so be it. So far, luckily, it hasn’t been their children that have been slaughtered.

Of course, in the United States, one may easily be gunned down not only on a school campus but in a church, a movie theater, a restaurant, a grocery store, or any other public place where people are apt to congregate. In the past times, gun violence was usually directed at people known by the shooter: a friend, family member, or spouse. Nowadays complete strangers are often the targets of bullets flying everywhere.

Eugene Stoner, working for the ArmaLite Company, first developed the AR-10 fully automatic rifle in the 1950s. It would, with the help of Jim Sullivan and Bob Fremont, go on to morph into the AR-15 and AR-16 which were first used on the battlefields of Vietnam. This ushered in the era of the fast, lightweight, and deadly .223 cartridge in combat situations. Colt had bought the design for these rifles in 1959 and sold the AR-15 semi-automatic version to the public until 2019. By then there was a variety of similar weapons being produced by other companies.

The NRA considers the AR-15 to be “America’s Rifle” for civilians. The descendants of Eugene Stoner disagree. In a statement after the Uvalde, Texas shooting they opined that he had designed the rifle for the military, not the public, and “would have been horrified and sickened as anyone, if not more by these events”. This has been the weapon of choice causing the highest body counts in American mass shootings, including Uvalde.

But let’s not discount that Austrian gun maker, Gaston Glock, and his popular semi-automatic polymer-framed pistols that have also featured prominently in mass shootings. A pocketful of thirty-round magazines can turn one of these handguns into a carnage-inducing machine well-suited for someone bent on killing as many people as possible in a church or school.

America’s dubious reputation as the self-murdering center of the world isn’t about to change any time soon, especially with spineless politicians running the show. As we become more tribal, subservient, and morally bankrupt this unnecessary blood will continue to flow. Luckily, it’s an election year and your vote, as well as your voice, do actually count for something.

Dexter K. Oliver is a freelance writer from Duncan, AZ. He has passed an FBI background check and has a concealed carry permit but dropped out of the NRA decades ago.