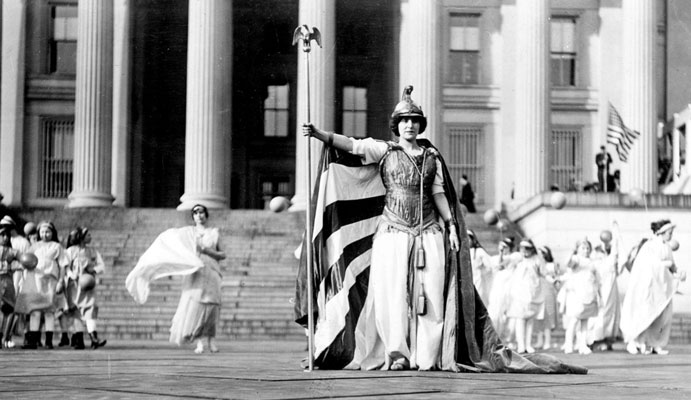 Photo Courtesy Library of Congress: The German actress Hedwig Reicher wears the costume of “Columbia,” with other suffrage pageant participants standing in the background, in front of the Treasury building in Washington, D.C., on March 3, 1913. The performance was part of the larger suffrage parade of 1913. The 19th Amendment to the U.S. Constitution giving all U.S. women citizens the right to vote was passed when Tennessee became the 36th state to ratify the amendment on Aug. 18, 1920. The ratification was then certified on Aug. 26, 1920.

One hundred years ago, a young state representative named Harry Burn, at age 24, sat uncomfortably at his desk in the Tennessee legislature. The entire country was watching as Tennessee was the last of the 36 states needed to ratify the United States Constitution granting women the right to vote.

That day, Burn wore a red rose on his lapel, the flower representing anti-suffragists’ opposition to the women’s vote. Those advocating for women’s suffrage wore yellow roses, and women dressed head to toe in white symbolizing purity, hope, and solidarity. The period was described as the “war of the roses.”

Black and white photography of the time depicted women prominently in white as they marched the streets while crowds of men stood along sidewalks in dark suits. The contrast in colors was as stark as the contrast in sentiment as men and women across the country debated for decades whether women should be allowed to vote at the ballot box.

As this young state representative in Tennessee prepared to cast the final vote to break the 48-48 tie, he touched his lapel remembering the handwritten letter inside of his jacket from his mother. She wrote, “be a good boy” and “vote for suffrage!”

When Burns’ name was called for the vote, those seeing his red rose anticipated the end. Instead, he raised his hand and responded, “Yea!” in favor of the women’s vote. Everyone paused in surprise. Advocates for suffrage cheered with celebration. But Rep. Burn became afraid and fled, hiding from the outraged anti-suffragists.

The next morning, the young representative explained his historic vote and shared how he felt a moral and legal obligation “to free 17 million women from political slavery” and that “a mother’s advice is always safest for a boy to follow.”

Several states to the west had already taken similar action, including Arizona. In 1912, upon statehood, Arizona advanced women’s suffrage, a full eight years before the 19th Amendment’s passage. Posters declared, “Those who obey the laws should have something to say as to their making. Those who pay taxes to support government should be represented in the government. Arizona women struggled as anxiously as men in building the State.”

Early pioneers who were instrumental in the national women’s suffrage movement began their call to action in the great state of Arizona. Frances Willard Munds, from Prescott, served as the president of the Equal Suffrage Association where she saw the legislative measure for suffrage initially fail by a veto at the hands of Arizona’s territorial governor. Munds responded in disappointment, saying such a measure would never succeed unless it was adopted by a “vote of the people.”

Munds worked with suffragette Rachel Emma Berry from St. Johns in Apache County to convince the men of Arizona to support this historic measure. By a statewide ballot initiative, Arizona voters granted women the right to vote by over 60 percent of the electorate on Nov. 5, 2012.

Munds and Berry became the first women elected to the Arizona Legislature from their respective counties and continued their efforts as the women’s vote was considered across the states.

This laid the foundation for Arizona’s long history of female trailblazers. Elsie Toles, a teacher born in Bisbee who managed 90 rural schools in Cochise County, would later become the first woman elected to the office of State Superintendent in 1921.

Sandra Day O’Connor who grew up on a Duncan area cattle ranch in Greenlee County in the 1930s was the first woman to serve as Senate Majority Leader in Arizona and the country and became the first woman appointed to the country’s highest Court as a United States Supreme Court Justice.

Arizona has had the most female governors of any state, with four female governors, three of whom served consecutive terms. The state is seventh in the nation for the percentage of women serving in the Legislature at 38.9 percent.

As we celebrate the month of August as suffrage month and the 100th anniversary of the women’s vote, we recognize the strong female leadership of our state’s history and courageous spirit of trailblazers that remain a legacy of Arizona’s past and present.