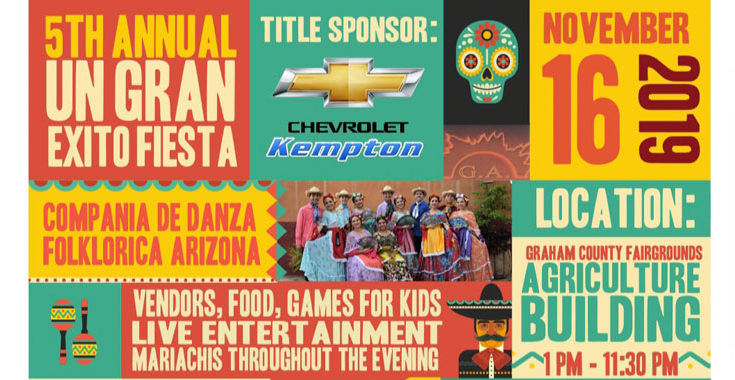 Event is Saturday, November 16 at the Graham County Fairgrounds Agriculture Building from 1 – 11:30 p.m.

GRAHAM COUNTY FAIRGROUNDS – Are you ready for an evening of food, fun, games, music, dancing, vendors and fun all to benefit a good cause? Then look no further than the Eastern Arizona Hispanic Heritage Corporation’s 5th annual Un Gran Exito Fiesta this Saturday, Nov. 15, at the Graham County Fairgrounds Agriculture Building. The Hispanic Heritage Corporation is a nonprofit 501(c)3.

General admission is just $25 and includes the show without dinner, or guests can purchase a table seat for $55 each for the complete package. Each table seats eight and a complete table can be purchased for $440.

This year, Herman BB Andrews will be recognized as the event’s Hispanic Teacher of the Year.

Born and raised in Safford, Andrews was all-state in football, basketball, and baseball and was an All-American baseball player at Eastern Arizona College, which helped him get a scholarship to Grand Canyon University, where he also played ball.

Dr. Alfredo and Evangelina Valenzuela family will be honored as Family of the Year. The family legacy involves teaching and sharing the Mexican traditions of Mariachi music and they run a Tucson foundation that reaches numerous schools. They also have started various community youth groups to increase the mariachi community.

“The legacy that Dr. Valenzuela has started here at Davis School with Las Aguilitas is endless and continues to be strong and thriving in making musicians around Tucson,” said Valenzuela’s son, Jaime Valenzuela. “Every student we teach is like a seed that has been planted; in which they go on to teach others the same way they were taught.”

After serving a Vietnamese-speaking mission for The Church of Jesus Christ of Latter-day Saints in Houston, Texas, Bennett attended Southern Utah University, where he graduated with a Communications degree and a minor in Political Science. He then attended law school at the University of Tulsa College of Law in Oklahoma.

After law school, Bennett accepted a job at the Twin Falls County Public Defender’s Office in Idaho. From there, he then went to the Maricopa County Attorney’s Office in Phoenix and advanced to the major crimes unit before leaving for the Final County Attorney’s Office and was recognized as the Final County Prosecutor of the Year and was chosen as a finalist for the 2008 State of Arizona Prosecutor of the Year.

Handling nearly all major prosecution for Graham County, Bennett was recognized as the 2017 State of Arizona Prosecutor of the Year.

He is married to Shawnda Bennett, who is the music and band teacher for the Pima School District and has five children. He is also an active member and leader in his church and is pursuing a master’s degree in his spare time through Southern Utah University. Bennett is a huge college football fan and spends his summers following the Arizona Diamondbacks as one of their biggest fans.