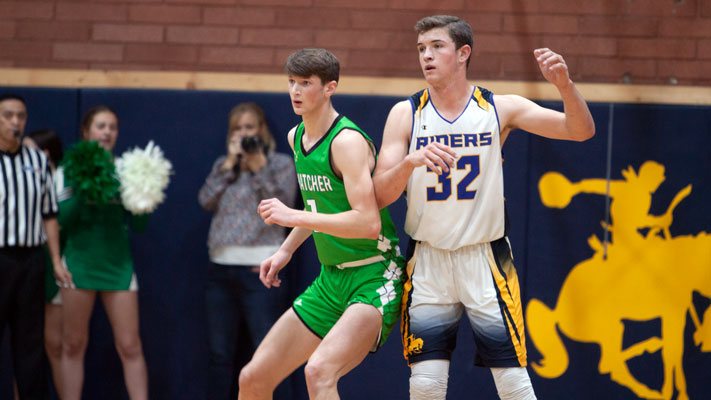 PIMA – The Thatcher Eagles (3-0 conference, 12-1 overall) – fresh from their superb performance in the White Mountain tourney – took the fight to Pima (2-0 conference, 10-4 overall) on Tuesday night and left with bragging rights for the season as they completed the sweep, 50-42.

The Eagles defeated the Roughriders in the championship game of the EAC Holiday Tournament in December, 45-38. The teams do not play each other again this year as they are in separate conferences.

Neither team was effective from deep, as they both only made one 3-pointer each. The playoff-type atmosphere in a packed Pima gym added to the ambiance as the players’ senses appeared heightened and they were perhaps a bit tight. Pima missed several bunnies at the hoop, and fouls were aplenty with Thatcher hitting 9-12 from the charity stripe while Pima made the most of their trips and went 3-4. Thatcher ended up with one more field goal (19) than Pima (18) for the contest.

Pima head coach Cliff Thompson pointed to turnovers and missed opportunities at the hoop as reasons for the defeat.

“We turned it over too much and then missing shots that we probably should put down – you know, we hit two or three of those shots and it changes the end of the game,” coach Thompson said. “Thatcher’s a good team but I feel like defensively we were fine, for the most part. But turnovers and missing easier shots is what I think cost us in the end.”

Bradley Curtis was the difference-maker of the night and that is an understatement. Bradley hoisted the team on his shoulders in the first quarter, scoring 9 of their 13 points to give Thatcher the edge after one, 13-11.

Bradley finished with a game-high double-double of 27 points and 15 rebounds, but it wasn’t just the amount he scored, it was how he scored. Pima plays tight defense – as the Eagles can attest – but Bradley had watched film of Michael Jordan and Kobe Bryant earlier in the day and it must have rubbed off on him because he seemingly was doing his best impression.

Multiple times it looked as if Pima defenders had stopped him with blocks. But somehow, Bradley seemed to hang in mid-air and either outlast the block or alter his shot to get it up toward the glass. At this point, most people are probably thinking it’s going to be a bad shot and to get in position for the rebound. But time after time, his circus-type shots found the bottom of the net on a consistent basis. Add all the times he cleaned glass and hit putbacks and Bradley ended up going 12-20 from the field (60%) and was 3-5 from the free-throw line.

“It was a team effort,” Bradley Curtis said after the game. “The team found me and I just happened to put the ball in.”

Bradley has been on a tear over the holidays and Thatcher head coach Kyle Hull said he is still upset that Bradley was left off the all-tournament team up north. That said, he added that the whole team plays together no matter who gets the buckets that night.

“It doesn’t matter if Brad has 27 or if he has 2,” Hull said. “He’s just as happy for the guy who has 27 or they’re just as happy for him. He (Bradley) had a phenomenal tournament – there’s a little slight in the all-tournament team – but it doesn’t affect him. This is our next game back from that and he just takes it and keeps moving forward and he’s not the only one. Everybody has that same mentality and I believe that’s what is keeping us on this roll. It’s because of our chemistry and how everybody gels. We’re just happy for everyone.”

Initially, Pima jumped out to an early 6-0 lead behind its big man Seth Russell. Playing hard down low, Russell was consistent throughout the night and went 9-15 from the field (60%) and 1-2 from the free-throw line for a team-high 19 points and 13 rebounds. While Russell had his Windex out, nobody from Pima helped him clean glass as the team only had 5 other rebounds with no other player having more than 1.

“Seth played really well down low,” coach Thompson said. “We wanted him to be aggressive because I don’t feel like he was the last time we played and he was tonight and I expect him to be that way for the rest of the season now.”

Bradley brought Thatcher back and gave the Eagles their first lead of the night, 9-8, with 2:55 left in the first quarter. Wyatt Wiltbank hit Pima’s only 3-pointer to retake the lead, but Brandon Napier hit a bucket to tie it up at 11-11 and Thatcher would not trail again for the rest of the game.

Bradley and Russell continued to go back-and-forth in the second, but T.J. Reed hit Thatcher’s lone 3-pointer and the Eagles took a 27-21 lead into halftime. Reed and Brandon Napier both finished with 8 points on the night; followed by Christian Carter with 3, and Hudson Griffin and Cody Jones with 2 points each.

The third quarter is where Pima usually excels and the start of this one was no different. Buckets by Leland Thompson and Russell got the crowd going as Pima cut Thatcher’s lead to four points, 25-29. But Bradley Curtis stepped up and hit consecutive buckets to stretch the lead back to eight. He then later hit again to swell the lead to 10, but Russell countered and Thatcher was up eight, 37-29, heading into the final quarter of play.

“Grant played a lot better in the second half,” coach Thompson said. “He was more aggressive and that’s what we need out of Grant.”

Other scorers for Pima included Leland Thompson with 4; Wyatt Wiltbank with 3, and Coy Miller and Dallin Kartchner with 2 points each.

Still, it wasn’t enough, as Bradley continued to hit buckets and the Eagles hit their free throws to finish off Pima 50-42.

While 3A Thatcher and 2A Pima don’t play each other again this season, fans can likely see both these teams go deep into the state playoffs in their respective conferences.

Pima will hit the road and will take on the Trivium Prep Crimson Knights on Thursday, starting at 7 p.m.

Thatcher will next host Snowflake on Friday and Show Low on Saturday, both starting at 7 p.m.

“Our region looks tough again,” Hull said. “No days off from here on out.”