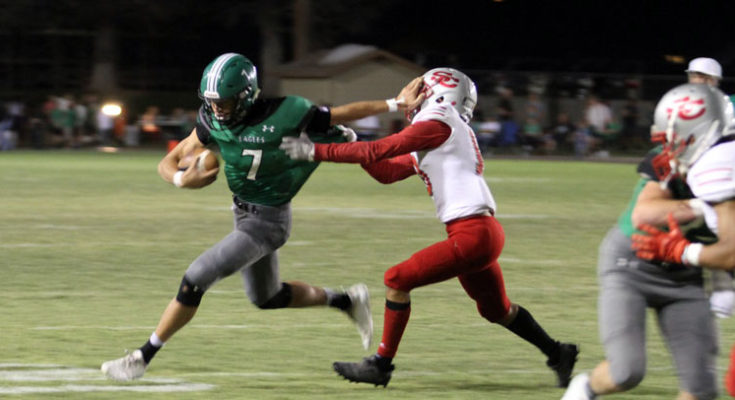 THATCHER – The highly anticipated rubber match of the 2A Championship game was was a blowout from start to finish as the Thatcher Eagles (6-0) reasserted themselves perched atop the overall 2A rankings with a severe 48-6 drubbing of the Santa Cruz Valley Dust Devils (1-4).

Thatcher scored on each of its first four possessions while Santa Cruz faltered with three straight punts (two of which were blocked), an interception and a turnover on downs before it finally found the end zone just before halftime.

Unlike last week, Thatcher’s offense played well from the start and methodically moved the ball down the field and complemented the defense, which was superb.

“We wanted to get off to a fast start (and) clean up our mistakes,” said Thatcher head coach Ramon Morales. “I think we did that . . . We took care of business, so hopefully, we just keep getting better every week.”

Facing their second 4th-and-1 on the drive, Brock Jones took it 16 yards to paydirt to open the scoring.

Then the Dust Devils problems with punting entered the mix.

First, punter Hunter Ogle kicked one off his halfback’s backside, giving Thatcher excellent field position at the 18. On the Dust Devils’ next possession, Ogle was blocked by Ben Shumway and Jones took it to the 16. Both short-field drives were capped by touchdowns by Thatcher quarterback Jack Kortsen, who took it in from 10 yards and 5 yards, respectively. Kortsen would tally two more rushing touchdowns for a total of four on the night before he was given a rest for the fourth quarter with the game out of hand.

“We executed,” Kortsen said. “We didn’t shoot ourselves in the foot. We did our job and we executed and it showed.”

With Thatcher already up 20-0 and Santa Cruz’s kicking game struggling, the Dust Devils elected to go for it on a 4th-and-9. However, the result was the same as Trace Goodman intercepted Joel Salazar and returned it 22 yards to the Dust Devils’ 30-yard line.

Trevan Clark made good on the turnover as he powered his way for a 15-yard TD.

A couple of series later, the Dust Devils inserted Austin Hukill at quarterback, and he led them on their best drive of the night.

After a screen pass to Hunter Ogle netted big yards down to the 11, the Devils were in scoring position but just 26.5 seconds remained in the half.

The shotgun hike was low and went through Hukill’s legs, but he gathered up the loose ball and heaved one to the end zone, which was gathered in by Arik Padilla for the Devils’ only score of the night. Thatcher went into the locker room at halftime comfortable up 27-6.

Thatcher didn’t put on the brakes, however, and after showcasing their preeminent run offense to open the third quarter, Kortsen hit Cole Motes on a big 30-yard pass play on 2nd-and-12 from midfield.

Another turnover – this time a fumble by Hukill – gave the ball back to Thatcher, and this time Kortsen hit his tight end, Spencer Stevens, who was wide open over the middle. Stevens looked to score on the play but was run down from behind by Salazar at the 4-yard line.

“We’ve been working on it (passing) a lot,” Kortsen said. “Get it out there and show teams that we can pass, and I think we showed that tonight . . . Our run game is always good but when we need to we can throw the ball.”

Kortsen notched his fourth TD on the night when he took it in from the 4 and Thatcher was up 41-6 with 4:35 left in the third quarter. It would be the last action for Kortsen on the night his backup Javan Montoya finished the game.

It wasn’t over for Thatcher’s defense, however, as Riley Morris intercepted Hukill and returned it to the 34-yard line.

Quinton Turley, who had some huge hits on defense, then finished the drive and the scoring on the night with a 10-yard screen pass reception TD from Montoya. The score triggered a running clock at 48-6, and both teams had only one possession in the fourth quarter.

When asked if blowing out teams every week could be detrimental to the team come playoff time, Morales said the rest of the schedule has some good teams. The Eagles will face Pima, then have a bye, and then Round Valley and St. Johns before they finish the regular season with a creampuff game against Santa Rita.

“It’s not going to be easy,” Morales said. “But we want to keep getting better so we play our best football down the stretch, and that’s what we’re trying to do . . . We’re not afraid of anybody and we prepare week to week. (Whoever) that opponent is, that’s who we get ready for and we line it up and let’s play. That’s our philosophy.”

The Safford Bulldogs (2-3) continued their win streak with a big 48-19 victory over the Florence Gophers (0-5). The Bulldogs are sure to face a stiffer test Friday, Sept. 28, as they continue their road trip to Sahuarita (4-1) to face the Mustangs.