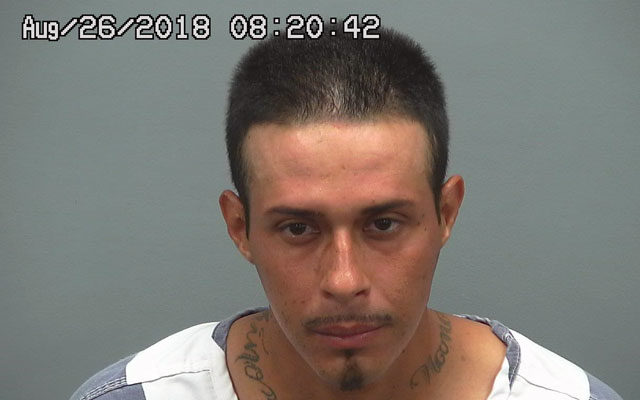 Contributed Photo/Courtesy GCSO: Manuel Salazar was arrested and booked into the Graham County Adult Detention Facility after fleeing from officers after already being detained and in handcuffs.

SAFFORD – A man who seemingly was just going to leave the night with a citation for having an open container of alcohol in his vehicle got hit with an escape in the third-degree charge after running away from officers after he was already handcuffed.

Manuel Salazar was arrested and booked into the Graham County Adult Detention Facility on the above-listed charges after accidentally coming upon an officer who was involved in a separate incident.

According to a Safford Police report, an officer was on a call at about 2 a.m. on Sunday, Aug. 26, informing a bicyclist about having a headlamp on his bicycle when a car pulled up near him in the 800 block of 10th Street.

The officer noticed the passenger and recognized he was on probation. After informing the passenger to go home, the officer turned his attention to the driver, Salazar, who appeared to be intoxicated. The officer recognized Salazar from a previous DUI arrest, in which he fought with officers and attempted to escape.

After noticing an open bottle of liquor on the driver’s side floorboard, the officer called for backup and took Salazar into custody. At that time, Salazar allegedly advised there was only one shot glass amount of alcohol left in the bottle.

While the initial officer was searching Salazar’s vehicle, the suspect slipped out of custody from another officer and began running down the street while handcuffed toward a residence he was staying.

The initial officer gave chase, and after Salazar went through a fence the officer tackled him to the ground. The officer had his flashlight in his hand at the time and apparently struck Salazar in the head on accident, which caused a laceration that required one staple to close at the Mt. Graham Regional Medical Center.

While bringing Salazar back to his patrol vehicle, the officer noted the suspect’s breath smelled like alcohol and Salazar allegedly admitted to drinking that evening.

After being medically cleared from the hospital, Salazar was booked into the jail without further incident.